Iran ready to use capacities to solve regional, intl. issues 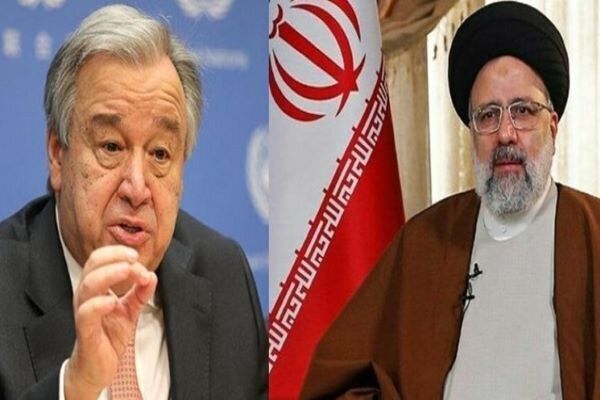 Iranian President Seyyed Ebrahim Raeisi said that Islamic Republic of Iran is ready to use its diverse and effective capacities to solve regional and global issues.

According to Mehr news, Iran has always emphasized lifting the blockade, establishing a ceasefire, trying to solve the crisis through Yemeni-Yemeni dialogues and without foreign interference, and is ready to use its capacities to solve regional and world issues, Raeisi said in a telephone conversation with the UN Secretary-General Antonio Guterres on Monday evening.

In response to UN Chef’s appreciation for Iran's goodwill and action in releasing two of the security prisoners in Iran, President Raeisi stated that this a proof of goodwill and the interactive approach of the Islamic Republic of Iran is to solve issues and problems.

Regarding the extension and continuation of the ceasefire in Yemen, Raeisi also said that Iran has always emphasized on lifting the blockade and establishing a ceasefire in Yemen and trying to resolve the crisis through Yemeni-Yemeni dialogues and understanding without foreign interference in this country, and your colleagues at the United Nations confirm this.

Addressing the Secretary General of the United Nations, Raeisi added, "I hope that with your efforts, Saudi Arabia will fulfill its commitments to stop the attacks on Yemen and will be persuaded to solve the problems of this country with the participation of the Yemenis themselves to let the people of Yemen determine their own future.”

Iranian president reemphasized that the Islamic Republic of Iran is ready to use its diverse and effective capacities to solve regional and global issues.

UN Secretary-General, for his part, while appreciating the good opinion and humanitarian and interactive approach of the Islamic Republic of Iran in solving regional and global issues, pointed to his meeting with the President on the sidelines of the 77th United Nations General Assembly and said, “It was a great honor for me to host you. In that meeting, we had important discussions, and I understood the concerns of the Islamic Republic regarding global issues very well.”

Antonio Guterres assured the Iranian President that he will use all his efforts to persuade Saudi Arabia to stop attacks on Yemen and to try to resolve the crisis through dialogue between different Yemeni groups.
Guterres stated, "I hope we can create a new political structure in a region that has a special and ancient place in human civilization with the participation of Iran, which has a history of several thousand years of civilization.”