Iran uses all capacities to establish peace in Afghanistan - ednews.net

Iran uses all capacities to establish peace in Afghanistan 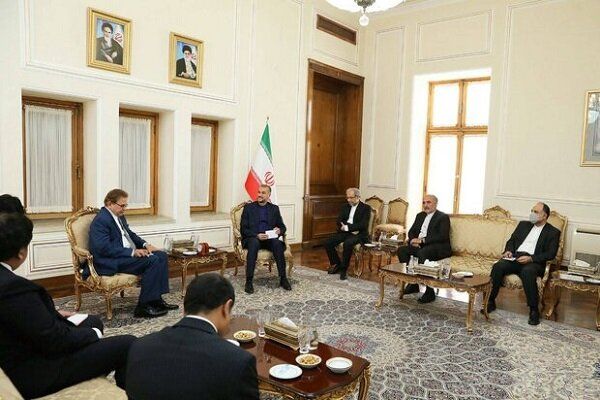 Iranian Foreign Minister Hossein Amir-Abdollahian said that his country uses all its capacities for restoration of peace and stability in Afghanistan and also well-being of people of this country, Mehr news reports.

Iran’s top diplomat Hossein made the comment in his meeting with the visiting Pakistani Prime Minister's Special Representative on Afghan Affairs Mohammad Sadiq Khan, who has traveled to Iran to consult the latest developments of Afghanistan.

While conveying the warm greetings of Iranian President Ebrahim Raeisi to the President and Prime Minister of Pakistan and his greetings to is Pakistani counterpart Bilawal Bhutto Zardari, Amir-Abdollahian described the relations between the two neighboring countries as "privileged".

During the meeting, Iranian foreign minister emphasized the expansion of cooperation between the two countries of Iran and Pakistan in all fields, especially regional security.

Islamic Republic of Iran considers the security of Pakistan as its own security, he said, adding that Iran is ready for boosting cooperation that will strengthen the security of the region.

Elsewhere in his remarks, Amir-Abdollahian pointed to the presence of more than four and a half million Afghan nationals in Iran, of which more than one and a half million have arrived in Iran after last year’s developments in Afghanistan and the rise of Taliban in this country, and emphasized that Islamic Republic of Iran uses all its capacities to establish peace and security in Afghanistan.

Pakistani Prime Minister's Special Representative on Afghan Affairs, for his turn, pointed to his positive and constructive consultations with high-ranking Iranian officials on the issue of Afghanistan and security of the region and added that the two countries of Iran and Pakistan are the most affected by the developments in Afghanistan due to the large influx of refugees, the decrease in the living standards of the people of this country, increase in insecurity and the growth of drug trafficking.

Cooperation between Iran and Pakistan can help people of Afghanistan to reduce their suffering, Mohammad Sadiq Khan added.