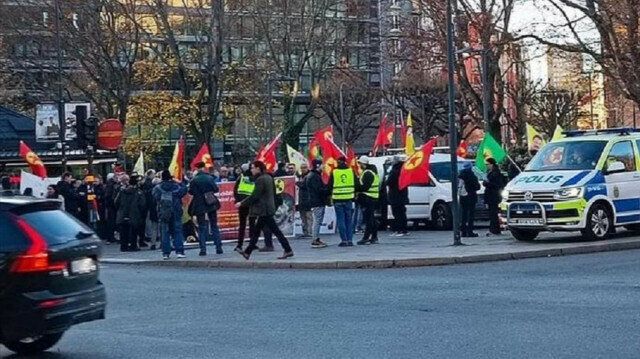 Supporters of the PKK/YPG terrorist organization held a demonstration in Sweden’s capital on Saturday, calling for an end to Türkiye's counter-terrorism operations in northern Iraq.
Carrying posters, rags and other items symbolizing the terror outfit, they gathered in the Norra Bantorget Square in central Stockholm.
Turkish security forces regularly conduct anti-terror operations in northern Iraq, a region where PKK terrorists have hideouts and bases from where they plot cross-border attacks.
Abandoning decades of military non-alignment, Sweden and Finland formally applied to join NATO in May, a decision spurred by Russia's war on Ukraine.
But Türkiye voiced objections to their membership bids, accusing the two Nordic nations of tolerating and even supporting terrorist groups.
Stockholm and Helsinki struck a deal with Ankara in June, which requires them not to provide support to the PKK and its offshoots, or to the Fetullah Terrorist Organization (FETO), the group behind the 2016 defeated coup in Türkiye. Ankara has also called for extradition of terror suspects.
Turkish officials, including President Recep Tayyip Erdogan, have warned Türkiye will not give the nod to their memberships until its concerns are addressed.
Swedish Prime Minister Ulf Kristersson and NATO Secretary General Jens Stoltenberg recently visited Türkiye to discuss the membership bids, which require unanimous approval from the alliance's 30 members.
In its more than 35-year terror campaign against Türkiye, the PKK – listed as a terrorist organization by Türkiye, the US, and EU – has been responsible for the deaths of more than 40,000 people, including women, children and infants. The YPG is its Syrian offshoot.