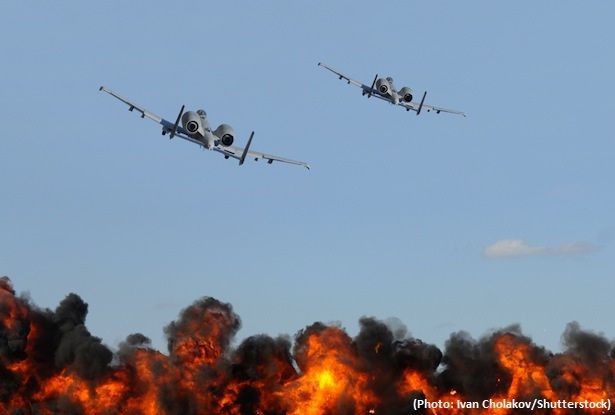 US National Security Advisor John Bolton framed the risk of a United States military confrontation with Iran. Stating that Washington is deploying a strike group of aircraft carriers and a task force of bombers near the Iranian borders, he noted that “the United States is fully prepared to repel the attack.” Thus, John Bolton confirmed that the White House is at the red line and is ready to deliver a preemptive strike on Tehran.

After the statement by John Bolton, the head of the US defense department, Pat Shanahan, tried to keep silence. However, he subsequently wrote on his Twitter page that deploying a strike force against Iran is an “act of prudence” in response to an alleged Iranian threat. Not limited to one message, Pat Shanahan added that the United States is urging official Tehran to “calm down.”

John Bolton and Pat Shanahan were trying to make it seems like the carrier strike group and bombers began to move towards Iranian territory immediately after their public rhetoric. However, in fact, the USS Abraham Lincoln combat group was deployed in April 2019 and even took part in military exercises in the Mediterranean.

In this regard, it is very interesting that Bolton and Shanakhan attempted to issue the deployment of the American army to the Middle East, which had already taken place, as the upcoming one. The key point in this international game is that, despite the official status of the national security adviser, John Bolton is not the commander of any kind of troops, and therefore has no authority to give orders to change the locations of individual units of the US Armed Forces. Accordingly, he could not order to deploy a strike group against Iran.

As for Pat Shanahan, at present he is only acting as head of the Pentagon, which indicates that he does not have access to the start of any large-scale military movements, unless they are authorized by the US President. In turn, the deployment of aircraft carriers and bombers toward the Iranian borders began long before Bolton and Shanahan formally announced this.

In other words, Washington prepared for a provocation against Iran systematically for several months. And the alleged Iranian threat is just a reason to make the secret preparations for war obvious.

Meanwhile, the White House’s administration is seriously worried that the Ayatollah regime, in response to the actions of the US military, could block the Strait of Hormuz.

Therefore, it is not surprising that, due to fears of this, Mike Pompeo suddenly canceled a meeting with German Chancellor Angela Merkel and went to Baghdad on an unofficial visit. His goal was to urgently develop a set of measures to counter Iran in the event of an escalation of the conflict.

The paradox is that the deployment of the American grouping of forces in the Middle East and the sudden international activity of Mike Pompeo are not random phenomena, but links to a large geopolitical chain, the beginning of which was laid down by Israeli intelligence on April 16, 2019 during a meeting at the White House. Then the representatives of the Mossad gave an analytical report to American colleagues, containing plausible scenarios of military actions that could be implemented by Iran in the Middle East region.

It is worth noting that neither the White House nor the leadership of the Southern Command of the US Armed Forces has yet presented to the general public a detailed description of the alleged Iranian threat. The accusations against Tehran are limited to vague wording: “clear signs of danger”, “preparing provocation”, “possible attack”. At the same time, no one can explain exactly what kind of attack is possible, what exactly a provocation can be, and what specific signs the Iranian threat differs from.

The CNN TV channel decided to fill the gap in the wording, explaining that Washington most likely took the threat of the displacement of Iranian ballistic missiles by sea in the immediate vicinity of the Persian Gulf. This fact provoked the deployment of the American grouping of forces against Tehran.

Such a statement is absolutely ridiculous. The problem is that Iran does have an arsenal of medium and short-range missiles that pose a threat to the United States. However, these missiles are not sea-based. In particular, Tehran has a family of ballistic missiles “Zelzal-2”, created by analogy with the “Frog-7”. These missiles entered service with Syria, Yemen and Lebanon. In addition, Tehran has advanced models “Zelzal-2” – “Fateh-110”, as well as “Zulfiquar”.

“Fateh-110” were actively used in Syria, Yemen and Iraq. In particular, in September 2018, the “IRGC” units launched 7 such missiles on Kurdish positions in northern Iraq. In October of the same year, the launch of the Zulfiquar ballistic missile against the targets of the Islamic State in Syria was recorded.

Equally important is the fact that Iran has repeatedly transported conditional missiles and these transports have never caused extreme irritation on the part of Washington.

The existing routes for the transportation of Iranian ballistic missiles were formed over the course of several years almost under the very nose of the United States. In this regard, Tehran, if you follow the logic of John Bolton, has long had the opportunity to create a threat to the security of American interests. However, this threat has become apparent only now, which is rather strange. Therefore, the deployment of an aircraft carrier group and slime bombers on the Iranian border is absolutely pointless, considering, moreover, that the bulk of Iran’s missile arsenals are mobile.

The US military experience related to the organization of conflicts in the Persian Gulf, as well as Riyadh’s attempts to eliminate the centers of resistance of the Hussites in Yemen, clearly demonstrate how ineffective aviation is against mobile targets. This shows that the use of American bombers and fighters against the Iranian missile arsenal is also pointless, since Iran’s mobile complexes can quickly change their home base.

The American “hawks” in the person of John Bolton and Mike Pompeo it seems that purposefully are trying to provoke a conflict with Iran, apparently not realizing that if such a conflict occurs, Washington could definitely lose. No blitzkrieg towards Iran is impossible. Tehran does not even need to do something to win the war: it only needs to withstand the first blow.