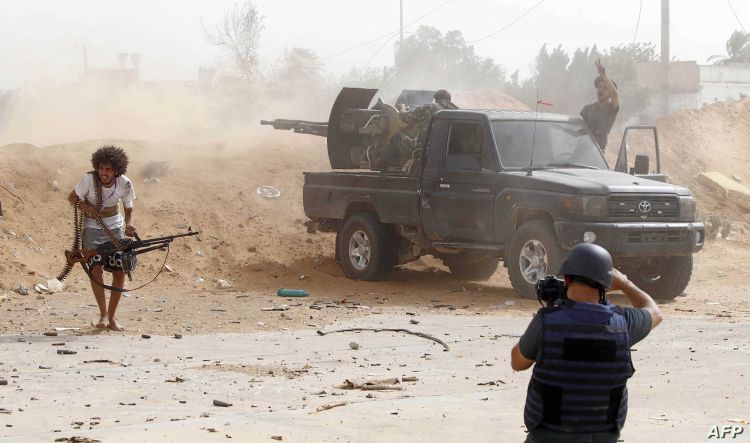 One of the most important results of the latest meeting between Russian President Vladimir Putin and President Recep Tayyip Erdoğan was their joint call for a cease-fire in Libya.

The call stipulates the end of hostilities as of 00:00 on Jan. 12. The U.N.-backed Government of National Accord (GNA) has welcomed the call, while General Khalifa Haftar rejected the cease-fire and announced that his troops will continue military operations.

As a matter of fact, there were a few people believing that Haftar forces would stop its offensive against the Tripoli-based government after it captured Sirte, a strategically important province. Heavily backed by the air forces of the United Arab Emirates and ground forces of Egypt, Haftar forces will unlikely stop until they enter Tripoli.

That shows the need to expand global diplomatic efforts to press ahead on Haftar and its regional supporters for the cease-fire.

Germany and Italy are quite active to this end although the United States and the European Union seem to be not so enthusiastic in endorsing the Turkish-Russian call for a cease-fire. Algeria, a neighboring country to Libya, also expressed its support for the cease-fire.

For the Trump administration, what happens in Libya if the Haftar forces secure the oil reserves of the country is not that important. Those in Washington must be able to realize that these reserves belong to the people of Libya and they cannot be left to the hands of just one person.

The EU has a vague position regarding Libya. Three prominent EU countries - France, Italy and Germany - that are closely interested in developments in Libya have different interests and priorities.

It is unfortunate for the EU to narrow its outlook on the developments in Libya with Turkey’s recent deal with the GNA on the delimitation of the maritime zones in the Mediterranean Sea. Perhaps, a more broadened approach from the EU could be heard on Jan. 12 as EU Council President Charles Michel will pay a visit to Turkey to discuss all the aspects of bilateral issues as well as regional conflicts.

In line with the need for an immediate cease-fire in Libya, Italian Prime Minister Giuseppe Conte will hold talks with Erdoğan on Jan. 13. This meeting will particularly be important as Conte just met Haftar in Rome last week.

On the same day, a senior Turkish delegation made up of Foreign Minister Mevlut Çavusoğlu, Defense Minister Hulusi Akar and intelligence chief Hakan Fidan will pay a follow-up visit to Moscow to discuss what could be done next.

Despite all these diplomatic shuttle and expression of shared concerns that Libya could be a second Syria, it is still hard to suggest whether these efforts would yield a result and a cease-fire can be reached.

As stated by Çavusoğlu on Jan. 6, after Haftar’s deadly attack on a military school, U.N. Secretary-General Antonio Guterres should be more active in Libya.
The only way for a political settlement is through an enhanced cease-fire and all responsible governments should work to this end. The opposite is the repetition of the mistakes committed in the Syrian theater at the expense of lives and growing instability.