The absence of peace increases the risk of a new war | Eurasia Diary - ednews.net

Proposal of great aid package by EU to Armenia, not to Azerbaijan whose territory was subjected to occupation, is not understandable - Farid Shafiyev
Read: 248

Georgia could be platform in Turkish-Armenian rapprochement - Expert
Read: 235

The absence of peace increases the risk of a new war 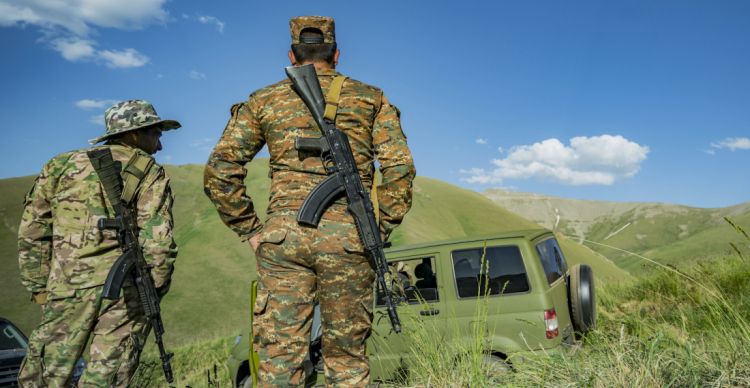 Eurasia Diary presents an article titled " The absence of peace increases the risk of a new war" published in Karabakhspace.eu.

Article was written by Vasif Huseynov, a Senior Advisor at the Center of Analysis of International Relations (AIR Center) and Adjunct Lecturer at Khazar University in Baku, Azerbaijan.

A new war between Armenia and Azerbaijan cannot be ruled out unless the current arrangements are reinforced by a peace treaty, warns Vasif Huseynov in this op-ed for KarabakhSpace.eu.

Normalising relations between the two conflicting states – Armenia and Azerbaijan – requires the sides to officially recognise each other’s internationally recognised territory and to respect the other’s sovereignty. Unless they comply with this principle, which constitutes a major foundation of modern international relations, the two countries will remain under the constant threat of a sudden escalation with potentially dramatic ramifications for their peoples.

Azerbaijan, fully cognisant of the importance of normalising its relations with Armenia for the peace and security in the South Caucasus, has officially called upon its neighbour to sign a peace agreement denouncing any claims to the other’s internationally recognised territories and putting a resolute end to hostilities. Towards this end, Baku also called upon Armenia to launch the demarcation and delimitation process of the state border through the mediation of international observers. These calls were reiterated by President Ilham Aliyev of Azerbaijan on 25 June in a meeting with an EU delegation in Baku. He declared, “If we do not have a peace agreement with Armenia, it means that there is no peace”, adding “we want to move from a post-conflict situation to peaceful development and co-operation in the South Caucasus”.

The lack of such an agreement creates new challenges and risks for regional peace. Dr Farid Shafiyev, Chairman of the Baku-based Center of Analysis of International Relations (AIR Center), a think-tank close to the government, warned in a recent tweet that disrespect to the principle of territorial integrity opens a dangerous path of mutual claims to each other’s territories. If Armenia declines to recognise Azerbaijan’s internationally recognised borders, then it should be ready for a similar attitude from the Azerbaijani side, he stressed.

Yet prospects for a peace treaty appear to be slim as Armenia puts forward preconditions unacceptable for the Azerbaijani side. In response to the Azerbaijani leaders’ consistent calls for a peace treaty and therein recognition of each other’s territorial integrity, the Armenian side states it needs prior agreement on the status of the Armenians living in the Karabakh region. This is an unacceptable condition for the Azerbaijani government, as Baku, in line with resolutions of the United Nations Security Council adopted in 1993, considers the Karabakh region as part of its sovereign territory and rejects any international negotiation about its status.

The dispute was further exacerbated in recent days by armed escalations between the militaries of the two countries along the state border and in the territories of the Karabakh region that are under the control of Russian peacekeeping forces.

On 6 July, Azerbaijan’s Defence Ministry announced an attack against the units of the Azerbaijani Army stationed near the recently liberated Agdam district by “illegal Armenian armed detachments located in the territory of Azerbaijan, where the Russian peacekeeping forces are temporarily deployed”. According to the Ministry, a serviceman of the Azerbaijan Army, who is involved in road improvement work, was wounded.

In the subsequent days, the intensity of these clashes increased alarmingly spreading to the entire state border between the two countries, including Azerbaijan’s exclave, Nakhchivan. According to Armenia’s Ministry of Defence, an Armenian serviceman was killed in the Yeraskh section of the Armenian-Azerbaijani border (the North-Western section of Azerbaijan’s Nakhchivan region) during clashes on 14 July.

These clashes took place despite the deployment of 2,000 Russian peacekeepers to the Karabakh region and the establishment of the Joint Russian-Turkish Centre for Monitoring the Ceasefire in Karabakh to “exercise control over the ceasefire” under the trilateral (Armenia, Azerbaijan, and Russia) agreement of 9 November 2020.

Russia’s Ministry of Defence reacted only to the fighting in the vicinity of Azerbaijan’s recently liberated city of Shusha, stating that the shooting took place between “the units of the armed forces of Azerbaijan and Armenia”. This was interpreted by the Azerbaijani side as indirect admission of Russia’s failure to ensure the withdrawal of the armed forces of Armenia from the Karabakh region as agreed in the trilateral ceasefire agreement. The document envisaged the withdrawal of Armenian armed forces in parallel with the deployment of the Russian peacekeeping mission. It appears that more than seven months from the end of the 44-Day War, Armenia’s armed forces are still illegally stationed there.

This causes societal outrage in Azerbaijan against Russia’s peacekeeping mission. From the perspective of Azerbaijanis, Russia bears a major responsibility as the guarantor of the ceasefire deal, and therefore, is expected to ensure the full implementation of the document.

What is more, the current deadlock between Armenia and Azerbaijan in the post-war peace process, Yerevan’s refusal to start negotiations over a peace treaty, and its continuous claims on the Karabakh region of Azerbaijan seriously jeopardise the delicate balance established after the 44-Day War. The recent clashes between the armed forces of the two countries demonstrate that a new war cannot be ruled out unless the trilateral ceasefire deal is fully implemented and reaffirmed by a more comprehensive peace treaty.