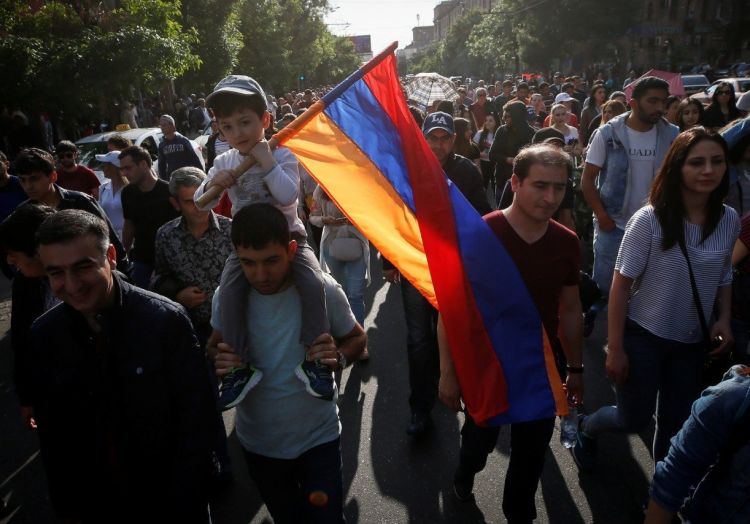 Article was written by Dr. Farid Shafiyev is the Chairman of the Center of Analysis of International Relations, where Dr. Cavid Veliyev is the Head of Department.

As a result of the forty-four-day war in the fall of 2020, Azerbaijan liberated its territories that had been under Armenian occupation for thirty years. After the war, Azerbaijan offered a peace treaty to Armenia and declared that it was ready to negotiate the provisions based on the territorial integrity of the two states. Meanwhile, Armenian prime minister Nikol Pashinyan, who won his country’s parliamentary elections on June 19, has stated that the status of the former Nagorno-Karabakh is an important issue in achieving the final peace agreement between the parties. The Armenian side still demands the right to self-determination for Armenians living in Azerbaijan, an issue that has caused two wars and led to the occupation of internationally recognized Azerbaijani territory from 1993–2020. Azerbaijani president Ilham Aliyev, on the other hand, stated that Armenians who are citizens of Azerbaijan will not be granted special status.

First, the Armenian nationalist movement began in 1988 in Azerbaijan’s Nagorno-Karabakh Autonomous Oblast (NKAO) with the slogan miatsum, which in Armenian means “unification.” Thus, it is an irredentist project to expand Armenian territory, rather than to pursue self-determination.

Second, the region’s autonomy, which was granted by the Soviet authorities to the former Nagorno-Karabakh on July 7, 1923, was given to everyone; not just the Armenians living in the region but also to Azerbaijanis. It is worth mentioning that, historically, Karabakh was a single unity comprising a mountainous part and a lowland region. The former Nagorno-Karabakh was an artificial Soviet creation to make Armenians a majority in the newly created communist administrative unit. On February 20, 1988, Armenian deputies to the former National Council of Nagorno-Karabakh voted to unify that region with Armenia contrary to Azerbaijani and Soviet laws. This move was illegal from the viewpoint of Soviet legislation.

Third, Baku patiently acted upon the demands of the Armenians living in Karabakh between the years 1988-1991, promoting socioeconomic programs despite the fact that, on average, Karabakh Armenians had better living standards than Azerbaijanis elsewhere. Moscow created a special administration in Nagorno-Karabakh, but Armenian nationalists continued to promote an irredentist agenda of unification with Armenia. On December 1, 1989, the Armenian Soviet Parliament adopted an illegal decision to unite the NKAO with Armenia: this decision was annulled by the Soviet Supreme Assembly.

Fourth, when the Armenians started an attack on the civilian population, the autonomous status of former Nagorno-Karabakh was abolished on November 26, 1991, by the Azerbaijani parliament. Therefore, according to the constitution and laws of Azerbaijan, there is no such region as the Nagorno-Karabakh Autonomous Region. Azerbaijan’s territorial integrity was recognized by the international community and reconfirmed by four resolutions of the United Nations Security Council adopted in 1993 in response to the occupation of Azerbaijani territories.

Fifth, contrary to Armenian claims, according to the Soviet Constitution, only fifteen Soviet republics had the right to self-determination. Nagorno-Karabakh, on the other hand, had no constitutional right to secede from Azerbaijan. The Armenian side argued that Nagorno-Karabakh’s so-called proclamation of independence was exercised in accordance with the April 3, 1990, law of the USSR “On the Procedures for Resolving Questions Related to the Secession of Union Republics from the USSR.” According to this law, during the initiation of the succession process by a Soviet republic, any autonomous entity also has the right to make its independent choice to remain in or leave the Soviet Union. However, Azerbaijan, similar to Armenia and other Soviet republics, left the Soviet Union on the basis of the Belovezha Accords after the collapse of the USSR on December 8, 1991. Therefore, one cannot cite the abovementioned law, dated April 3, 1990, as neither Azerbaijan nor Armenia used this law to secede from the USSR.

Sixth, international law does not grant a right of self-determination to any given group of people. There is a complex of conditions that determine whether this right is applicable and, contrary to the assumption of Armenian nationalists, Armenians in Karabakh do not fit the definition of a “people” for the purposes of self-determination. It is also worth mentioning here that the expulsion of 700,000 Azerbaijanis and the total destruction of infrastructure and cultural heritage also undermine any moral ground for an Armenian supposed self-determination claim. Moreover, on June 16, 2015, the European Court of Human Rights released its judgment in Chiragov and Others v. Armenia, finding that Armenia had effectively controlled the Azerbaijani-occupied territories.

Seventh, when the decision of the Armenians living in Karabakh to illegally secede was not approved by Baku, they tried to carry out this act through an armed operation. This armed attack caused the deaths of 30,000 people in the first war, with 4,000 people missing. In the second war, about 5,000 people from Armenia and 2,906 people from Azerbaijan lost their lives. The Helsinki Final Act and other relevant provisions of international law stipulate a peaceful separation with the consent of the central government, which is not the case with the Armenian irredentist armed movement.

Eighth, after the ceasefire agreement was signed in 1994, a diplomatic negotiation process started between the parties with the mediation of the Organization of Security and Cooperation in Europe (OSCE) Minsk Group. Azerbaijan offered the status of autonomy in return for the withdrawal of Armenian troops in and around the region of the former Nagorno-Karabakh. Armenia, however, did not accept this and, in March/April 2020, essentially abandoned the Madrid Principles elaborated under the auspices of the OSCE Minsk Group co-chairs—a factor that helped lead to the 2020 war.

Ninth, according to the latest figures, 20,000–25,000 Armenians live in Karabakh. This corresponds to 0.2 percent of Azerbaijan’s ten million population. Thus, the population of other ethnic groups living in Azerbaijan is much higher than the number of Armenians. They can all freely exercise their cultural and religious rights as citizens of Azerbaijan.

Tenth, Armenian minorities also live in the surrounding countries and so far, none of them have been given a special political status. However, they exercise their religious and cultural rights. Azerbaijanis residing in neighboring countries also live in the same way. President Ilham Aliyev, in one of his interviews, gave the example of Azerbaijanis and Armenians living together in Georgia and Russia, meaning that this could be a real possibility in Azerbaijan as well.

Apparently, the aim of those who want a special status for Armenians in Azerbaijan is not to solve the problem, but to deepen it, and even to create new areas of intervention in the future by providing a special status and even acting as its guarantor.

Today, after the war, there is a real opportunity to reach a durable security solution based on mutual respect of the two countries’ territorial integrity and minority rights. This is the only possible peaceful vision of the future.