US attack on Soleimani is a signal to Russia-Iran-China | Eurasia Diary - ednews.net

US attack on Soleimani is a signal to Russia-Iran-China 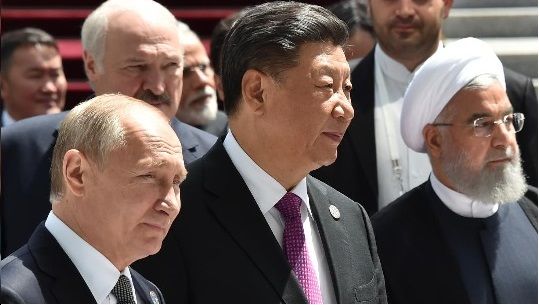 The US is trying to stop Eurasia's economic and political integration in order to delay its own demise, say international observers, explaining what message the US sent to the Russia-China-Iran "triumvirate" by killing Quds Commander Qasem Soleimani.
The assassination of Qasem Soleimani, an Iranian major general in the Islamic Revolutionary Guard Corps (IRGC) and commander of the Quds Force, in a targeted US air strike on 3 January came on the heels of joint naval exercise launched by Russia, Iran and China in the Indian Ocean and Gulf of Oman.
The "growing Russia-China-Iran trilateral convergence", as The Diplomat dubbed it in late December, is seemingly hitting a raw nerve in Washington: speaking to Islamic Republic of Iran Broadcasting (IRIB) on 2 January, Rear Admiral Khanzadi, the Iranian navy commander, said that Washington and its allies had held an emergency meeting aimed at disrupting the drills.
"Recent violent US attacks against Iranian allies in Iraq and Syria, culminating in the killing of Iran’s Major General Qasem Soleimani, are, in the wider geopolitical sense, meant to send signals to the building Eurasian triumvirate to cease their collaborative activities, let alone longer-term strategic and Belt and Road Initiative-linked designs," says Pye Ian, an American economic analyst and private equity executive.
According to Ian, the US decision to step up pressure on Tehran might be stemming from Washington's apparent belief that Iran is "the ‘weakest link’ in the strengthening Eurasian alliance".
However, "Russia, China and Iran cannot be attacked overtly, let alone invaded, occupied or 'regime changed'," the economic analyst highlights.
Christopher C. Black, a Toronto-based international criminal lawyer with 20 years of experience in war crimes and international relations, echoes the American economist.
"It is… in response to the close relationship between Russia, Iran and China and it is no coincidence that this murder took place just as the joint naval exercises in the Persian Gulf came to an end," he said. "Further, it is a threat to Russian strategic interests in Syria and to Syria itself."
Apart from this, the move indicates that "one of the reasons for US pressure on Iran is to control the oil supply to China in order to cripple China's development," Black suggests.
Russia and its military successes in the region have become yet another irritant for Washington, according to Max Parry, an independent American journalist and geopolitical analyst.
"The US likely feels the need to re-assert itself as a hegemonic power in the region, considering it is Moscow that emerged as the new honest peace broker in the Middle East with the Syrian conflict," Parry notes. "Russia completely outmanoeuvred Washington and by the end of the war, Turkey was practically in Moscow's camp. Trump has reset US foreign policy with the withdrawal from Syria and the targeting of Iran."
By killing Soleimani, the US "has completely overplayed its hand and this could be the beginning of the end for Washington because a war with Iran would be no cakewalk", he emphasises.