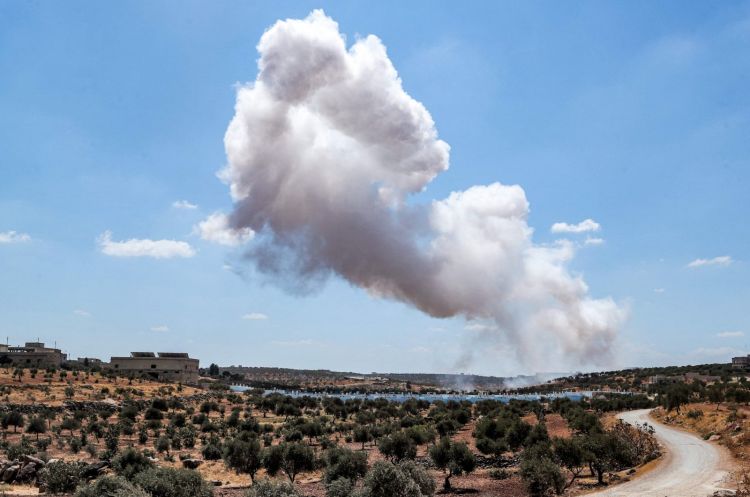 The Turkish military deployed more troops on the M4 highway south of Syria's opposition-held Idlib forces and are prepared for any potential ground operation, amid surging attacks by the Assad regime.
The Assad regime and its backer Russia stepped up their attacks on Syria’s northwestern Idlib province since August, as part of their weekslong campaign on the opposition bastion.
Turkey's military dispatched thousands of additional troops to opposition-held northwestern Syria ahead of a critical meeting with Russian and Iranian leaders next week, a report said Thursday.
Earlier in September, five military groups operating under the Turkey-backed Syrian National Army (SNA) in northern Syria united Thursday as the Syrian Liberation Front.
At a ceremony held in the center of the al-Bab district, the five divisions announced that they had merged and would operate side by side with the Turkish Armed Forces (TSK) in areas rid of terrorism following Turkey's military operations in the region.
Idlib falls within a de-escalation zone forged under an agreement between Turkey and Russia in March 2020.
The Syrian regime, however, has consistently violated the terms of the ceasefire, launching frequent attacks inside the de-escalation zone.
The Idlib region is home to nearly 3 million people, two-thirds of them displaced from other parts of the country.
During an attack targeted a vehicle of Turkish soldiers returning after a search mission on Sept. 11, 2021, two Turkish soldiers were killed and three others were injured in an attack carried out in the de-escalation zone in Idlib, according to the Defense Ministry of Turkey.
Since April 2018, attacks on Idlib, the last opposition stronghold, have dramatically intensified, causing new waves of refugees to flow toward the Turkish border and putting the country – which already hosts 3.7 million Syrian refugees – in a difficult position.
As a result, Turkey, which has the second-largest army in the trans-Atlantic NATO alliance, has funneled troops and equipment into the region in recent weeks to stop the Syrian regime’s advance and hoping to avoid another wave of refugees.
Turkish soldiers are currently stationed in the region to protect the local population and support counterterrorism groups. Despite the military escalation, Ankara has also been trying to keep diplomatic channels active with Russia in hope of finding a political solution, urging the country to uphold the peace agreements and ensure an immediate cease-fire.