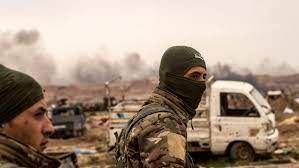 Al-Hasakah province: SOHR activists have reported that joint forces of SDF, Internal Security Forces and counter-terrorism forces have stormed the vicinity of Al-Sina’a prison in Ghuwayran neighbourhood in Al-Hasakah, where the forces stationed in close positions to handle the rebellion by ISIS fighters that started 48 hours ago on January 20.

According to SOHR sources, sporadic clashes are taking place in nearby buildings in Ghuwayran neighbourhood, during combing for fugitive prisoners.

SOHR sources had reported that a military convoy of the International Coalition Forces arrived in the vicinity of Ghuwayran prison in Al-Hasakah city, amid flights by Coalition helicopters. The riot in the prison is expected to reach an end in the upcoming hours.

Meanwhile, violent clashes continued in and out of the prison between ISIS members on one hand, and Asayish and counter-terrorism forces on the other, while US aircraft continued their strikes on areas where ISIS members are believed to be hidden in the vicinity of the prison.

The Syrian Observatory monitored a spike in the death toll of ISIS members, at least 56 members were killed. The number of deaths is likely to rise further amid reports on other deaths, while the fate of dozens of prisoners remains unknown.

Observatory asserts that the death toll was even higher, and the real number of fatalists was not exactly identified, as the fate of dozens members on both sides still unknown. In addition, there were many people sustained serious injuries.

On the other hand, six ISIS escaped prisoners were also arrested, which brought the number of arrested ISIS prisoners, who had escaped earlier from the prison, to 136. However, other ISIS prisoners, whose number remained unknown, were free.

SOHR sources confirmed that hundreds of ISIS prisoners managed to escape on Thursday evening and Friday dawn, before some were arrested while the fate of the others remained unknown.

Furthermore, the fate of tens of the prison’s employees and guards also remained unknown, as it is not known if they were all killed or some of them were held hostages by ISIS members and prisoners.

It is worth noting that Ghuwayran prison hosts nearly 3,500 ISIS commanders and members, and it is the only prison in the world hosting such large number of ISIS prisoners.

It is also worth noting that this was the most violent and largest attack on populated areas since elimination of ISIS as a controlling power in March 2019.