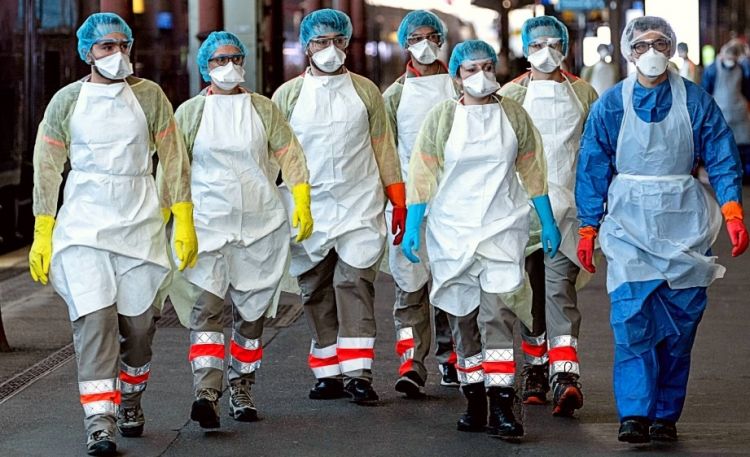 One by one, governments worldwide are gradually easing tough restrictions meant to contain the spread of the coronavirus - even as, in some countries, infection numbers continue to rise.
The move highlights the pressing need to cautiously reopen economies and restore livelihoods, but the path towards post-coronavirus normality is arduous and long.
Despite a non-universal approach over the best way forward, most countries tiptoeing out of lockdown are implementing a new way of living shaped by strict physical-distancing rules as they try to avoid lasting economic damage.
But with no known treatment or vaccine available, experts warn that an extensive lifting of controls could spark a second - and perhaps deadlier - wave of a pandemic that has so far sickened more than five million people and caused more than 330,000 related deaths.
"Right now, the biggest threat of virus growth is probably from the relaxing of restrictions," Benjamin Neuman, a virologist at Texas A&M University-Texarkana, told Jazeera.
"There isn't a strong scientific rationale for why restrictions need to be relaxed right now in certain places, but because of public opinion it may seem politically necessary."
How the world reached five million COVID-19 cases
Cumulative count of confirmed cases Indeed, the World Health Organization (WHO) has repeatedly urged countries to be cautious about easing coronavirus-related restrictions, warning that a premature lifting could lead to an uncontrolled resurgence in transmission and an amplified second wave of cases.
In recent weeks, as debates about exit strategies intensified around the world, a legion of experts have published relevant guidance, with many scouring the past to offer recommendations on the path ahead.
Among them were scientists at the Center for Infectious Disease Research and Policy (CIDRAP), who outlined a series of predictions for the development of COVID-19 in the near future.
Three scenarios
Using past influenza outbreaks as their key comparative model, as well as SARS and MERS data, the scientists at the University of Minnesota concluded the pandemic will likely last for up to two years and will not be halted until 60-70 percent of the population is immune.
Taking into account the high probability that a vaccine will not be available this year, CIDRAP's first scenario foresees the first wave being followed by repetitive smaller ones that will appear consistently, before diminishing next year. These waves will vary geographically and their intensity will depend on lockdown measures that will periodically return.
Another version, the most optimistic one, predicts a "slow burn" of continuing transmission and case occurrence following the first wave. Under this forecast, the world will likely not see the return of mitigation measures.
The worst-case scenario foresees a larger second wave before the end of 2020, followed by one or more smaller waves next year. This is based on trends recorded during the influenza pandemic of 1918-1919, that killed an estimated 50 million people, as well as the 2009-2010 H1N1 pandemic.
"Whichever scenario the pandemic follows (assuming at least some level of ongoing mitigation measures), we must be prepared for at least another 18 to 24 months of significant COVID-19 activity, with hot spots popping up periodically in diverse geographic areas," the scientists said in the report (PDF) that was published on April 30.
While stressing that it is not known how the pandemic will develop, the WHO also foresees, in general, three possible outcomes: Complete interruption of human-to-human transmission; recurring, large or small, epidemic waves; and continuous low-level transmission.
"Based on current evidence, the most plausible scenario may involve recurring epidemic waves interspersed with periods of low-level transmission, Tarik Jasarevic, WHO spokesman, told Al Jazeera. "This guidance has been developed in the context of these scenarios and will be updated as knowledge of the dynamics of the pandemic evolves."

Still, the consensus among experts is that epidemic models predicting deaths and infections are extremely complex - and in the case of COVID-19, they are compounded by the disease's high degree of transmission and the seemingly large percentage of infected people who are asymptomatic.
"Mathematical models are a good way to predict the outcome of the pandemic, but right now one thing the modelers are struggling with is estimating the number of positive cases, with and without symptoms," Neuman said. "That is an area where aggressive testing and contact tracing is an essential tool."
Looking ahead, most experts appear certain the pandemic will not go away on its own and a solution will only be found when a vaccine becomes available.
"The coronavirus has not disappeared despite social distancing and it will continue to spread until there is a vaccine," infectious diseases expert Amesh Adalja of the Johns Hopkins University Center for Health Security told Al Jazeera.
"We will have a second and even third wave if there is no vaccine," he said. "We do know that coronavirus is, in general, accelerate their spread in the fall and winter as environmental conditions favor their transmission. We have to be prepared that when flu season begins that we also have a concomitant coronavirus season."
Currently, at least 90 vaccines against COVID-19 are being developed globally, with several of them already in the clinical trial phase. While the pace of the vaccine race has been unprecedented, many experts expect the search to take at least a year to 18 months. And then if this optimistic scenario were to come true, they caution that producing enough shots of a successful candidate may be as difficult as developing one.
According to Gregory Poland, an infectious diseases expert and head of Mayo Clinic's Vaccine Research Group, it is still "very hard to know" when a vaccine will become available.
"It really depends on a trade-off between safety and speed," he told Al Jazeera. "Normally, a vaccine takes about seven to 10 years to develop and go through all the safety testing in the US. The fastest that has ever been done is four years for Ebola vaccine - this [COVID-19] is being proposed to be done in months. The only way you can do that is sacrifice some level of assurance about safety or do some kinds of testing that we have not done before with a virus like this."
Recommendations
But with no sign of a vaccine or cure in the immediate future, public health experts say decision-makers should waste no time in making preparations for a second wave.
Strict adherence to health and safety protocols, including physical distancing rules and availability of face marks, is seen as paramount, as is equipping medical facilities and healthcare workers with the tools needed to fight the disease when there is a new spike in infections.
"We can be ready for the second wave of the pandemic by ensuring that hospital capacity is sufficient, that personal protective equipment supplies are adequate, the diagnostic testing is readily available, and that health departments have the ability to do contact tracing," Adalja said. "Lastly, it is very important that people get their influenza vaccination's so that we can limit the number of people that require hospitalisation for influenza."
For their part, the CIDRAP researchers urged global health authorities to plan for the worst-case scenario over the coming two years, which foresees no vaccine availability or achievement of herd immunity (the situation when a critical number of the population has recovered from an infectious illness, resulting in those people gaining antibodies that will effectively stop the disease from spreading).
They also called on governments to develop strategies on how to reimpose prevention measures to manage outbreaks in real-time and to ensure adequate protection for those on the healthcare front lines.
"Risk communication messaging from government officials should incorporate the concept that this pandemic will not be over soon and that people need to be prepared for possible periodic resurgences of disease over the next two years," the report said.