Is there any point in replacing the OSCE Minsk Group with another diplomatic mechanism? - The explanation by Azerbaijani expert
Read: 552 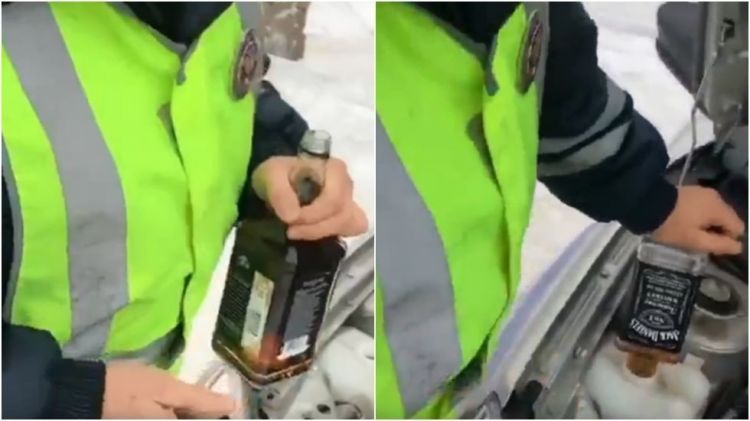 Siberian traffic cops are in hot water after pouring Jack Daniels into their car instead of antifreeze. An internal probe was launched into why they had alcohol on them during their shift and why they cursed so much in the clip, Eurasia Diary reports citing Russia Today.

Winters are cold in Siberia’s largest city of Novosibirsk, and driving without antifreeze is really dangerous as ice on the windshield can drastically limit visibility.

But what can be done if you’re out of special de-icing liquid? Local traffic police officers have found a novel solution, but it left both the public and their supervisors unimpressed.

The clip, uploaded to Russia’s VK social network, starts with a still of a whiskey bottle in the trunk of a police vehicle and then cuts to the officer opening the alcoholic drink.

“I wanted to save it for the Christmas party, but the job comes first. I don’t have any anti-freeze,” the policeman explains as he sticks the bottle upside down into the antifreeze canister in the trunk of his car.

Meanwhile, his colleague, working as a cameraman, laughs out loud, shouting: “That’s how real cops roll.” Both officers also generously spice up their language with expletives, which were bleeped out in the footage.

“I can really afford this as I work in the road police,” the officer in the video boasts as the bottle empties.

The clip concludes with a shot of the two officers inside the car trying out how whiskey works as antifreeze. “Such an awesome smell,” one of them exclaims as alcohol is sprayed on the windshield of the blue-and-white police vehicle.

When the video began doing the rounds online, police initially said it may have been a Christmas prank and that the liquid featured in the footage was most likely not alcohol. But commenters swiftly noticed that the bottle in the video was factory sealed and had all the requisite tax stamps on it.

Some locals pointed out that the whole stunt was unnecessary, as a supermarket that sells antifreeze was located just across the road. The price of a bottle of Jack Daniels bottle starts at 1,500 rubles (around $24) in Novosibirsk, while de-icing liquid is at least 10 times cheaper.

“That’s it, fired,” one user wrote. It's too early to say whether this will be the case, however, as the results of an internal probe into the conduct of the officers are yet unknown.