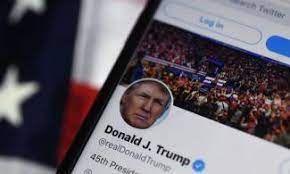 Author Michael Shellenberger has released the fourth installment of the “Twitter Files,” an initiative backed by Twitter CEO Elon Musk to shed light on “free speech suppression.”
In Twitter Files Part 4, Shellenberger on Saturday continued from Matt Taibbi’s Friday thread on the banning of former US President Donald Trump's Twitter account, and related conversations leading up to that decision.
The thread of uncovered information about Twitter’s content moderation before Musk focused on employees’ reactions to the Jan. 6, 2021 attack on the US Capitol, leading up to the banning of Trump instituted on Jan. 8, 2021.
Shellenberger discussed how former CEO Jack Dorsey was out of the country during a series of decisions that would ultimately lead to the permanent suspension of Trump’s Twitter account.
He shared screenshots of a conversation on Jan. 7 between Twitter's former safety chief Yoel Roth and an anonymous co-worker where he asked to blacklist the terms “stop the steal” and “kraken” which propped up the conspiracy that Trump won the 2020 election.
A later conversation from Jan. 7 showed that pressure from Twitter employees factored into Dorsey’s decision to distribute permanent bans after repeated violations of the community guidelines.
Dorsey sent out a company-wide email that day claiming that the social media outlet would remain consistent with its policies, to which some employees responded negatively.
Hours later, Roth messaged colleagues saying Dorsey had approved a new “repeat offender” approach to Twitter’s “strikes” system, where a person who accrued five strikes would be permanently suspended.
The five-strike permanent suspension occurred the following day with Trump’s personal account.
On Jan. 8, Twitter announced a permanent ban on Trump due to the "risk of further incitement of violence."
Shellenberger's thread also revealed instances where employees took action against tweets or users without a specific Twitter policy to back the choice.
“Twitter employees use the term ‘one off’ frequently in their Slack discussions,” said Shellenberger, providing screenshots of examples. “Its frequent use reveals significant employee discretion over when and whether to apply warning labels on tweets and ‘strikes’ on users.’