"Azerbaijan and Uzbekistan are not too far from each other" - Umud Mirzayev spoke to the Uzbek media - ednews.net

As reported, the Azerbaijani delegation recently visited Uzbekistan. The delegation included President of the International Eurasia Press Fund (IEPF) Umud Mirzayev, head of the UNEC Research Foundation (UNF) Ellada Aliyeva, head of the www.diyar.az project Nigar Amirbayova and others.
Azerbaijani representatives took part in the presentation of Azerbaijani national cuisine as part of the Silk Road Crane International Film Festival in Tashkent. During the visit, meetings were held with representatives of the media and civil society of Uzbekistan, as well as artists.
Along with a number of Uzbek media resources, the influential website kultura.uz covered the visit of the Azerbaijani delegation.
EDNews.net presents the article for readers' interest.
According to the Azerbaijan Film Days agenda, eight films have been presented at the festival - Ismayil Safarali's "Fisherman's Daughter", Rufat Hasanov's "Inner Island", Ali-Sattar Guliyev's "Olympia", Ksenia Lagutina's "Farida". At the same time, the program included Orman Aliyev's "We", Fariz Ahmadov's "The Last", Murad Huseynov's "Time of sandhill Cranes" and Murad Huseynov and Saddam Mehdiyev's "Two Ways". The films have been successfully shown in Tashkent, Nukus and Khiva cinemas.
Azerbaijan has been represented at the festival by the head of the Cinematography Department of the Ministry of Culture, director Rufat Hasanov, director of the Azerbaijanfilm film studio Fariz Ahmadov, People's Artist Vagif Mustafayev and others. The film "Two Ways" by young Azerbaijani directors Murad Huseynov and Saddam Mehdiyev won the nomination "For Enlightenment and Progress" in the "Cinema in 5 Days" creative competition of the "Silk Road Crane" film festival. Films from Germany, Estonia, Uzbekistan, Switzerland and Mexico also won the competition.
The Azerbaijani delegation included a well-known public figure, President of the International Eurasia Press Fund (IEPF) in Baku Umud Mirzayev. In addition to participating in the film festival, the guest from the Azerbaijani capital also met with the chairman of the Union of Journalists of Uzbekistan Olimjon Usarov. During the conversation, various forms of cooperation between the creative association and the IEPF have been discussed. The parties have agreed to sign a Memorandum of Cooperation in the near future. The themes of the co-published books on the history of our countries and the achievements of the years of independence have been agreed. 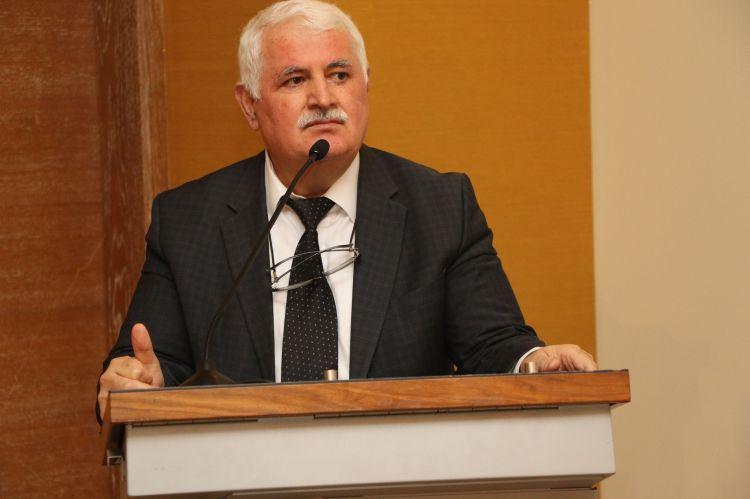 We asked Umud Mirzayev to answer our questions about the visit to Uzbekistan.
- Dear Umud Mirzayev, what made you come to the film festival in Tashkent?
- We knew that this would be a festival at a very high level, and we would learn a lot of new things for ourselves, both in the field of cinema and in the development of modern Uzbekistan. It is also very important to develop our relations in all areas of cultural cooperation. And all our plans came true. The festival impressed us with its scale, organization and level of preparation. We have a lot of old friends that I really want to meet here. We are very close to Tashkent, and we recently became close friends with a group of Uzbek journalists who visited Azerbaijan at our invitation. There was an opportunity to come, I came and I was not mistaken in my expectations. And if we are all with you today, it is very important.
I attended the opening and closing ceremonies of the festival, I was just shocked by the scale. We respect the decision of the Uzbek leadership to hold this festival every year. This is the right decision. This will give very good results in the coming years. You have great opportunities for this. I'm sure of it. Uzbek cinema will soon begin to develop rapidly.
- What can you say about the development of bilateral cooperation in other spheres?
- You have a large country with great resources, and our Azerbaijan is developing rapidly. Therefore, we need to develop our foreign trade relations as widely as possible. In addition, we are not too far from each other, the flight is only two hours. There are common economic needs and interests that need to be addressed for the benefit of our countries and peoples. And the leaders of the two countries are already doing a lot for this. One of the purposes of my visit is to establish active contacts in the field of mass media. While you are here, we have established relations with your University of Journalism and Mass Media, the Union of Journalists of Uzbekistan. The bridge we built earlier with you will bear fruit. For example, more and more students from Uzbekistan are graduating from our universities and succeeding. The Heydar Aliyev Azerbaijan Cultural Centre in Uzbekistan contributes to the development of comprehensive cooperation. And we are convinced of this when we are in your beautiful country these days. We must strengthen our ties comprehensively.
A presentation of Azerbaijani gastronomy was held in one of the best hotels of the capital as part of the Silk Road Crane International Film Festival. Well-known specialists in this field, heads of the Union of Chefs of Uzbekistan, the Embassy of Azerbaijan in Uzbekistan, the Azerbaijan Cultural Centre named after Heydar Aliyev, members of the Uzbek-Azerbaijani Friendship Society, journalists and bloggers took part in it.

At the presentation, Nigar Amirbayova, a leading specialist in Azerbaijani gastronomy, gave a master class on cooking national dishes.

A beautiful example of the Azerbaijani national cuisine was prepared and presented a variety of delicious fillings - leaf, tomato, pepper, eggplant filling. The process of their preparation was demonstrated. In addition, master classes on cooking Uzbek national pilaf were presented.
Nigar Amirbayova speaks:
- I wanted to come to Uzbekistan a long time ago, before the pandemic. My plans have been to visit both Tashkent and the regions. I wanted to gather information about your best, most popular dish - pilav (steamed rice), and then talk about its different types - Tashkent, Bukhara, Samarkand, Fergana. They are all different. I wanted to make a short film on this subject, which I could talk about later in the master class program. We have a very good friend here, Bakhtiyar Nazirov, an excellent potter from Rishtan. He has been inviting me for a long time and we will visit him these days. My plans in the first stage did not materialize due to the complications of the coronavirus. And then, when you were invited to take part in this festival of Azerbaijani cuisine in Tashkent, everything changed on the day of your wonderful film festival. Food is also a culture. You can exchange recipes quietly, informally, cook delicious meals and sit at the same table. This is the best way in the world to bring people together. And here we have achieved all our goals. Now we will do our best to develop relations with our Uzbek colleagues.
I have been in the culinary field for a long time. I have a project called www.diyar.az. This is almost a gastronomic map of Azerbaijan. We can say that the project is dedicated to gastro-tourism. I think Uzbekistan is one of the most worthy countries that can achieve the greatest development of this type of tourism. Good, delicious food also brings people together. I am absolutely sure of that.
Umud Mirzayev:
- After arriving in Tashkent, Nigar was always at work and almost did not sleep. She cooked day and night. And everything was going well. Now it is necessary to turn all this into practical work.
Twenty-four years later, the Tashkent International Film Festival was held again, but in a completely different, more modern format. We can say with confidence that this has become a world-class event in the field of culture and cinema. World movie stars Steven Sigal, Nikita Mikhalkov, Gerard Depardieu, Franco Nero and many others took part at her work.
Boris Babayev
Kultura.uz