The relations between Azerbaijan and US are built within framework of NATO programs - Azerbaijani Defense Minister | Eurasia Diary - ednews.net

The new Russian Su-34 will be able to detect and shoot down invisible targets - VIDEO
Read: 1900 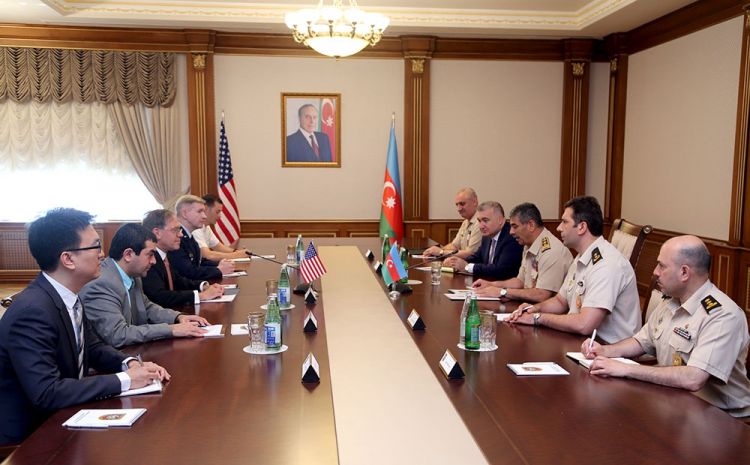 On July 19, the Minister of Defense of the Republic of Azerbaijan, Colonel General Zakir Hasanov has met with the Ambassador Extraordinary and Plenipotentiary of the United States of America to our country Earle Litzenberger, Ministry of Defense reports.

The Minister of Defense noting that relations between Azerbaijan and the United States are built within the framework of NATO programs and on a bilateral basis, brought to the attention the importance of developing cooperation in the military, military-technical and military-educational fields.

The Minister touching upon the military-political situation in the region stressed the continuation of the aggression policy of Armenia. He noted that despite the efforts of the OSCE Minsk Group co-chairs in the settlement the Armenia-Azerbaijan Nagorno-Karabakh conflict, peaceful negotiations are deliberately delayed by official Yerevan.

E. Litzenberger, in his turn, stressing that the United States recognizes the territorial integrity of Azerbaijan and treats it with respect, the American diplomat noted that his country is a supporter of a peaceful solution to the Nagorno-Karabakh conflict, adding that this is also important in terms of the development and security of the South Caucasus.

Then the parties discussed aspects of regional and bilateral cooperation, the security of the Caspian Sea and important strategic infrastructures, the fight against the proliferation of weapons of mass destruction, the organization of mutual visits of specialists in military education, as well as a number of other issues of interest.

Ambassador E. Litzenberger introduced the US new defense attaché in Azerbaijan Colonel Terry Hamrick to the Minister of Defense.
The Minister congratulated the new military attaché with the beginning of his activities in Azerbaijan and wished him success in his future activities in the sphere of expanding military cooperation between the two countries.