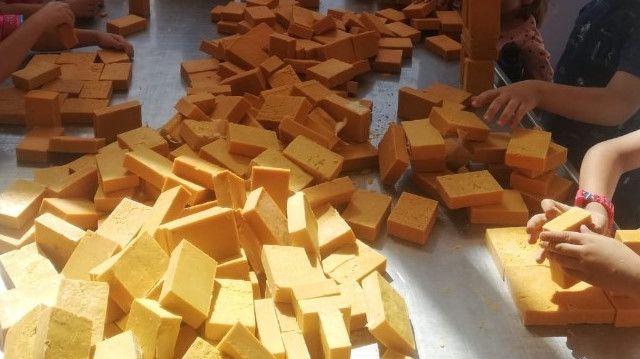 Hand-in-hand with locals, Syrian women who took shelter in a Turkish border city are taking back their lives through making natural soap with support from a nonprofit group, reported Eurasia Diary citing Yeni Shafak.
“Friendship is universal, something human, and has nothing to do with language,” said Zainab, 40, who fled Qamishli, a town in northern Syria, amid the eight-year civil war there. (To protect their identity due to security concerns, the names of Syrian women in this article have been changed.)
Recalling the day she first joined the soapmakers in Turkey’s southeastern province of Mardin, Zainab told Anadolu Agency that some people in the workshop hugged her, while others showed their sympathy in other ways.
“Until that day, I was struggling to build relationships since I don’t know Turkish, but I saw that friendship goes beyond language,” she added, speaking in Arabic through a translator.
When the Syrian civil war broke out in 2011, Zainab was studying law at university. Breaking off her studies, she fled to Turkey, and took shelter in Mardin for the last eight years with her sister, leaving six other siblings behind.
Finding it hard to cope with her changed circumstances, she started studying at Mardin’s Artuklu University, where she is now a final-year sociology student.
Four months ago, an Iraqi neighbor of Zainab encouraged her to attend a soap workshop in the city center. Since then, she has been learning to make natural homemade soap in addition to building friendships with the women of Mardin and Syrian refugees like her as well as earning a living.
Zainab says that she wants to stay on in Mardin and serve the city where she found a safe haven during the toughest time in her life, and where now she is being educated.
- Turkish border towns become hub for Syrians
Mardin, which borders Syria, has seen a huge influx of refugees since 2011. According to Turkey’s Migration Directorate, there are 88,000 registered Syrians in Mardin, or nearly 11% of the population.
Turkey itself hosts the largest number of refugees worldwide, with 3.7 million people, according to UN data.
Zainab is only one of 182 women working in the soap workshop, half of them Mardin natives, and the other half immigrants from Syria and Iraq.
Like Zainab, 29-year-old Aisha also came from Qamishli in northern Syria before taking shelter in Mardin, along with her mother and brothers.
Aisha said when she first came to Turkey seven years ago, she didn’t know what to do with herself. After first working at a coffee shop, she later found the soap workshop through a relative.
“This is the place where I feel happiest and most at peace,” she said.
“I cheer up and build friendships here. I love being here,” she added.
When asked if she had learned everything about the process of soap production, she smiled, saying that her training is continuing.
- Workshop transforms lives
The soap workshop in Mardin started as a project by RET International, a humanitarian group headquartered in Geneva, Switzerland but with offices in Ankara, Turkey’s capital, which supports young people and women through education.
With the escalation of the refugee crisis in 2014, RET launched education programs and workshops in various Turkish provinces such as language courses and psychosocial support, with the aim of helping the refugees integrate into society and also earn a living.
Among these projects is the workshop in Mardin where local women learn soap-making alongside Syrian and Iraqi women, which later turned into a workplace, with women selling their soaps under a brand.
“Our biggest support for the women is their involvement in the production process,” said Elcin Demirel, RET’s country director.
“In addition, we have supported them by bringing their products to market, as well as helping with transportation and branding. And we will continue to do that.”
Demirel told Anadolu Agency that all the women are paid equally on an hourly basis, and their group is making no profit after paying taxes.
At the workshop, the women also have the opportunity to expand their horizons by taking classes in marketing, entrepreneurship, design, and social media.
“Our long-term goal is to ensure that this workshop becomes a cooperative where women themselves do the process of marketing, standardization, quality control and other tasks,” said Demirel.