During the coronavirus pandemic, "Azerbaijan-Israel Strategic Partnership" was held yesterday with the organisational support of the "Azerbaijan House in Israel", the initiative of the head of the Azerbaijan-Israel Friendship Interparliamentary Commission, member of the Azerbaijani Parliament Anatoly Rafailov and the head of the Baku International Centre for Multiculturalism Arye Gut.
Noting that it was the first online conference that was held yrsterday.
Members of the Azerbaijan-Israel Interparliamentary Friendship Commission, MPs Anatoly Rafailov, Asim Mollazade, Ramin Mammadov and Shahin Seyidzade, as well as members of the Israeli Knesset - Yevgeny Sova from the "Israel is our home" party and Andrey Kozhinov from the Yesh-Atid-Telem party, as well as Holon Innovation took part in the conference. The President of the Institute, Professor Eduard Yakubov, and the former Deputy Minister of Defense of Israel, Dr. Ephraim Sneh attended the online conference.
In his opening speech, Arye Gut, Executive Director of the House of Azerbaijan in Israel and Head of the Baku Office of the Baku International Centre for Multiculturalism, noted that this was the first such event between Israel and Azerbaijan with the participation of MPs and the Israeli Knesset. "Thus, we are writing a history - we are holding an online conference during a pandemic. Regardless of who is in power in Israel, Azerbaijani-Israeli relations are developing positively, political dialogue is at the highest level, and today these relations represent a real strategic partnership. Azerbaijan-Israel trade cooperation is developing and is about to reach by $ 3.5 billion. In the past, the focus was on the oil and gas industry, but now other segments of the economy, including agriculture, high technology, health and military-technical cooperation, are also in progress. "Israel is one of the main buyers of Azerbaijani oil on the world market," the Israeli expert said.
Many Azerbaijani immigrants in the field of public diplomacy, as well as the "Azerbaijani House in Israel" are active and represent the republic with dignity, conveying to the Israeli society all the truth about Azerbaijan, its history and culture, the painful Armenian-Azerbaijani conflict over Nagorno-Karabakh. "The pain of the Azerbaijani people is the pain of the Jewish people, or vice versa, so every year Azerbaijan celebrates the Holocaust and the victims of the Khojaly genocide are commemorated in Israel," Aryeh Gut said.
The head of the Azerbaijan-Israel Friendship Interparliamentary Commission, MP Anatoly Rafailov said that the Azerbaijani-Israeli relations are an example for many countries. The Republic of Azerbaijan is one of the few countries in the Islamic world that has established friendly relations with the Jewish people and the State of Israel.
"In 1998, Prime Minister Benjamin Netanyahu paid a historic visit to Baku. Netanyahu later recalled his meeting with Heydar Aliyev, saying that he left a mark on his memory as a wise and powerful statesman. After Netanyahu's historic visit to Baku, Israeli-Azerbaijani relations developed rapidly.
During his visit to Azerbaijan on December 13, 2016, Israeli Prime Minister Benjamin Netanyahu met with Azerbaijani President Ilham Aliyev, where the sides exchanged views on the development of relations between the two countries. During the meeting, Netanyahu noted the strong relations and close friendship between Azerbaijan and Israel, as well as between the Azerbaijani and Jewish peoples. He said thousands of Jews living in Azerbaijan acted as a bridge between the two peoples. "The events of April 2016 proved once again that Israel provides political, diplomatic and moral support to Azerbaijan, as well as very important military-technological support," said MP Anatoly Rafailov.
According to the Azerbaijani MP, the human factor also plays an important role in Azerbaijani-Israeli relations.
There is a Jewish religious community in the Red Settlement (Qirmizi Qesebe) in the Guba region of Azerbaijan, and the Jewish Heritage Centre-Mountain Jews Museum, soon restored and initiated by Russian philanthropists of Jewish origin, Tanri Nisanov, Zarah Iliev and German Zakharyaev from the Red Settlement. This is a matter of pride for Azerbaijan, "Anatoly Rafailov said.
Member of the Milli Majlis, member of the Azerbaijan-Israel working group on interparliamentary relations Asim Mollazadeh noted that Azerbaijan cooperates with Israel in a multilateral format: “Our friendship and partnership is an important factor in building and developing relations between Azerbaijan and Israel. Historical relations between Jews and Azerbaijanis form the basis of strategic relations. is. As friendly states, both sides cooperate very seriously and comprehensively in the security, economic, energy, cultural and humanitarian spheres. Israel also provides significant support to Azerbaijan and in international relations. "
Dr. Efraim Sneh, a former Israeli Deputy Defense Minister, greeted the participants and noted that he had compared the current situation with the late National Leader's first meeting with President Heydar Aliyev in December 1993 and his numerous official and unofficial visits in subsequent years. He said he was very pleased with the friendship between the two countries.
"However, Azerbaijani-Israeli relations must go beyond military cooperation. We must not limit our friendship and cooperation only to military partnership. Cooperation between the countries is developing well. But I would like to see more cooperation of civil societies, for example, in culture, academia and technology." We have a broad platform for cooperation and we are obliged to use all of them, "said Dr. Ephraim Sneh said.
Speaking at the conference, Andrei Kozhinov, a member of the Knesset from the Young Atid-Telem party, stressed that the friendly and very reliable cooperation and partnership between the State of Israel and Azerbaijan is an ideal model for many countries around the world.
"In the most difficult times, these countries have always been together and always support each other. One of the main reasons for strong ties is the human factor, which plays the role of a bridge - a long and close brotherhood between Azerbaijanis and the 25,000 Jewish community in Azerbaijan." And today, during the pandemic, Israel and Azerbaijan continue to help and support each other. Certain medical equipment was recently brought to Azerbaijan from Israel. The rate of spread of the coronavirus is very similar to ours, so we need to interact with each other in this area, "said Knesset MP Andrei Kozhinov.
Speaking about the strategic importance of Israeli-Azerbaijani cooperation, Yevgeny Sova, a member of the Knesset's "Israel is our home" party, said that Israel considers Azerbaijan an important strategic ally in the South Caucasus and an important geopolitical actor in the region.
Avigdor Lieberman is one of the real architects of the Azerbaijan-Israel strategic partnership on the Israeli side together with the President of Azerbaijan Ilham Aliyev. Thanks to him, in Israel's foreign policy concept, Azerbaijan has transformed from a simple post-Soviet country into a strategic partner of the state of Israel.
The community of Azerbaijani immigrants in Israel plays an important role in the strategic partnership between our countries. I have known my friend and brother Arye Gut for many years, who has been a real bridge of friendship for many years and a real media lobbyist for the Israeli-Azerbaijani strategic cooperation and partnership. I know very well how much this society has played a role in promoting Azerbaijan. "There is almost no other society in Israel that is as close to its homeland and history as the community of Azerbaijani immigrants, and each of them is proud to say that there has been no anti-Semitism in Azerbaijan," said MP Eugene Sova.
Translated by Elnur Enveroglu 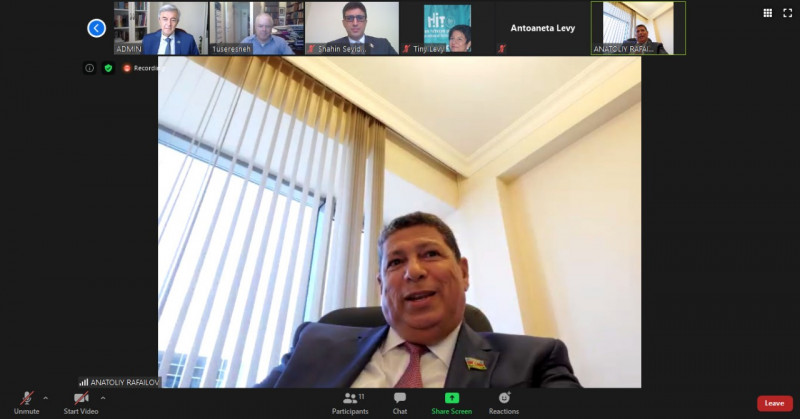 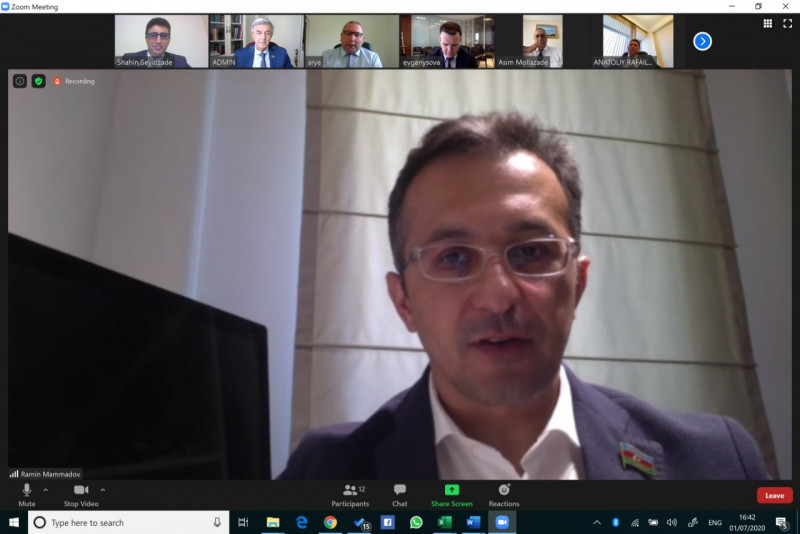 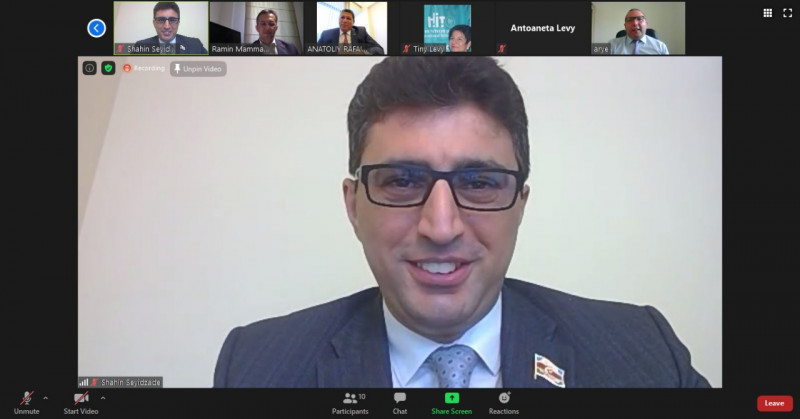 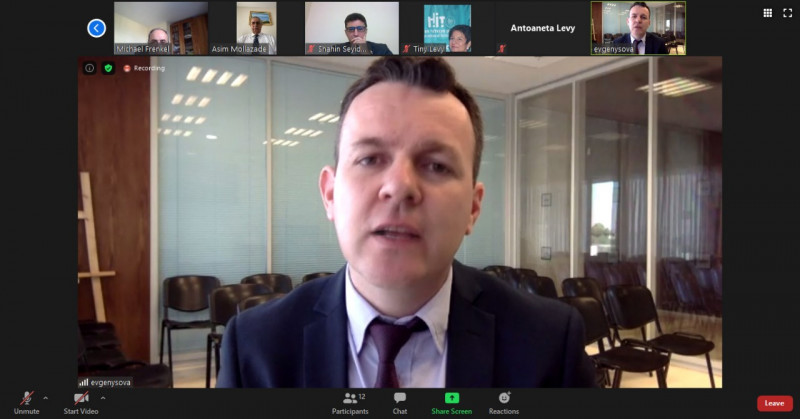 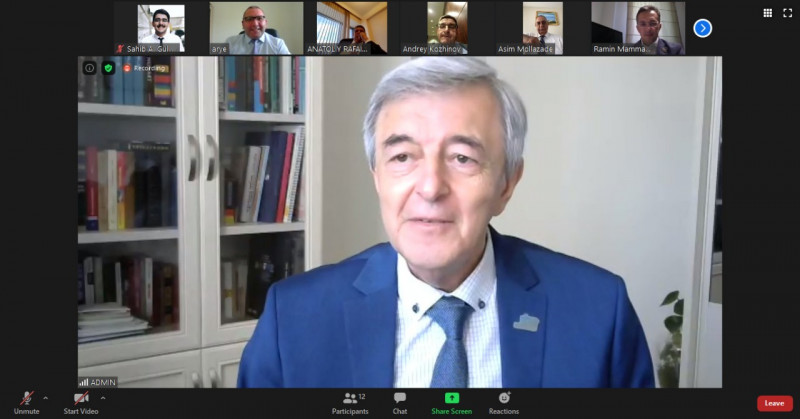