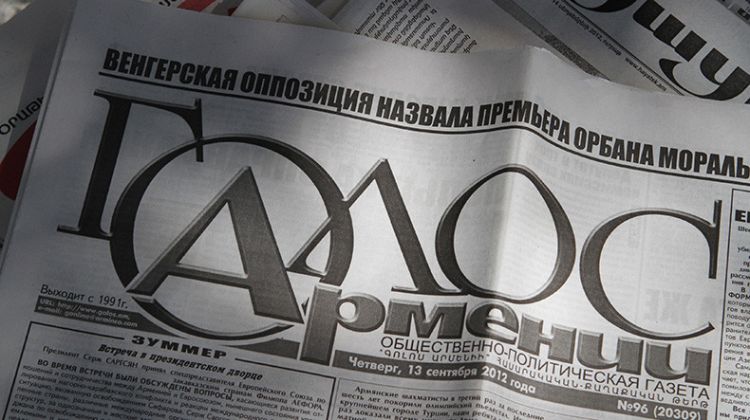 Envy and hatred are the feelings that characterise the Armenian people. This so-called ancient nation does not accept the unity of other nations, such as Russia-Azerbaijan friendship. The phenomenon of envy and jealousy stemming from the social and political crisis in Armenia is particularly noteworthy. The prevailing socio-psychological situation in this artificially created country has intensified this feeling.

It should be noted that the Armenian envy is the recognition of our superiority over them. The intention of the jealousy based on the rivalry is to destroy this advantage, so there is no need to succumb to provocations.

An article published in “Golos Armenii”, a popular Armenian source, clearly reflects the Armenian envy. And the subject of this unpleasant intention was cooperation between Russia and Azerbaijan in the field of biological security.

The point is that in June 2021, the International Eurasia Press Fund has presented a unique platform called "Eurasia: Common Biosafety Space", which allows to discuss the mechanisms of joint action between Azerbaijan and Russia to address the problems caused by the spread of especially dangerous infections.

To be honest, the author of the article in “Golos Armenii” first logically speaks of the incompetence of his government. Then, in a typical manner of the Armenian press, the author begins to vent the depressing mood of the local authorities on the initiative of the IEPF. In other words, the author of the article does not look up a mistake of their own, but tries to convict the others. When he does not find it, he chaotically moves his arms and scatters words talking nonsense.

For instance, “Golos Armenii” writes: “It seems that after the signing of the intergovernmental memorandum on biosafety, the strengthening of the common biosafety space in Russia and Armenia has been completed. Either they cannot do it, or they do not have the desire. However, such a desire in neighboring Azerbaijan, Turkey's most trusted ally and strategic partner, has emerged and been necessary after a long time. "

The tone of this statement is more like the primitive jealousy of a student who gets low marks and complains about the others getting good marks. Anyone who reads this article may think that at this moment the author will put his feet on the ground and complain that Azerbaijan is much more active than Armenia and that Baku's words are no different from deeds.

In fact, the expectations of the Armenian press are understandable. IEPF President Umud Mirzayev has always been the target of Armenian attacks. Mirzayev's activities against the Armenian propaganda and the injustice of the Armenian leadership always cause serious concern on the Armenian side. For 30 years, the IEPF has been exposing the Armenian lies in the example of Mirzayev to international platforms such as the UN Assembly, and is fighting against the Armenian aggression on all fronts. It is not surprising that the Armenian press has such a sharp approach to the work of the Fund. Golos Armenii is well aware that this international platform aims to develop bilateral relations between Azerbaijan and Russia and will be successful. Of course, this is not good for Armenia, but they have no choice but to make weak attempts to insult the activities of the IEPF, and especially Umud Mirzayev, with the help of non-professional journalists.

Armenia's regress compared to Azerbaijan is broad and sustainable. The article in the Armenian edition is a proof of this. In short, Armenia will never be able to justify its stupidity from the position of an envious observer.