"Dershowitz was not a suitable person to interview as an impartial analyst and we did not make the relevant background clear to our audiences," the BBC said. 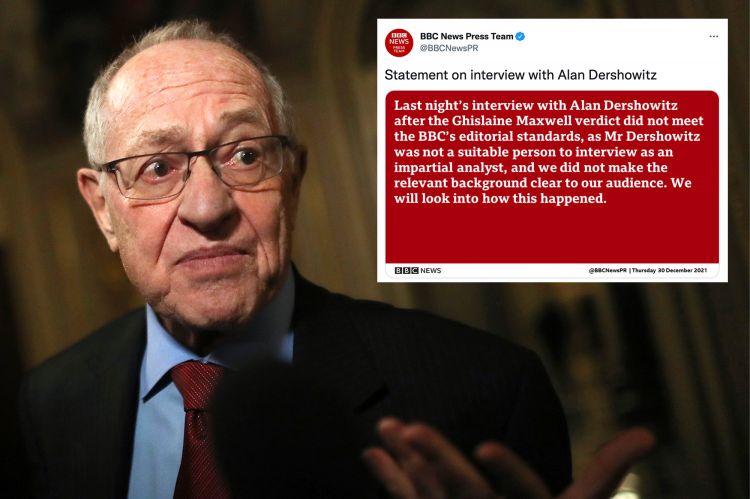 The BBC apologized on Thursday for interviewing Jewish-American attorney Alan Dershowitz in the context of Ghislaine Maxwell's Wednesday conviction.

A US Jury found Maxwell guilty of helping late financier and Maxwell's ex-partner Jeffrey Epstein sexually abuse teenage girls after she was accused of recruiting and grooming four teenagers for him between 1994 and 2004.

The United Kingdom's national broadcasting service failed to check for any potential conflicts of interest, considering Dershowitz himself was accused by Virginia Giuffre of being an eyewitness to sexual abuse of minors by Epstein, as well as "borrowing" Guiffre for sex from Epstein.

Dershowitz has continuously denied all allegations made against him, and in response to the Netflix series, he told The Jerusalem Post he plans to sue the streaming platform.

The attorney, who received airtime from the BBC following Maxwell's conviction, used said airtime to attack his accuser, who also made several allegations against British royal Prince Andrew. "The most important thing for British viewers is that the government was very careful who it used as witnesses," he told the BBC. "It did not use as a witness the woman who accused Prince Andrew, who accused me, who accused many other people, because the government did not believe she was telling the truth."

Following the interview, the BBC released a statement through its press team's Twitter, stating that the Dershowitz interview "did not meet the BBC's editorial standards."

"Dershowitz was not a suitable person to interview as an impartial analyst and we did not make the relevant background clear to our audiences," the statement read.

The BBC concluded the statement by saying it will "look into how this happened."

Dershowitz also acted as an appellate adviser for O.J. Simpson's defense team in the murder case of Nicole Brown Simpson.