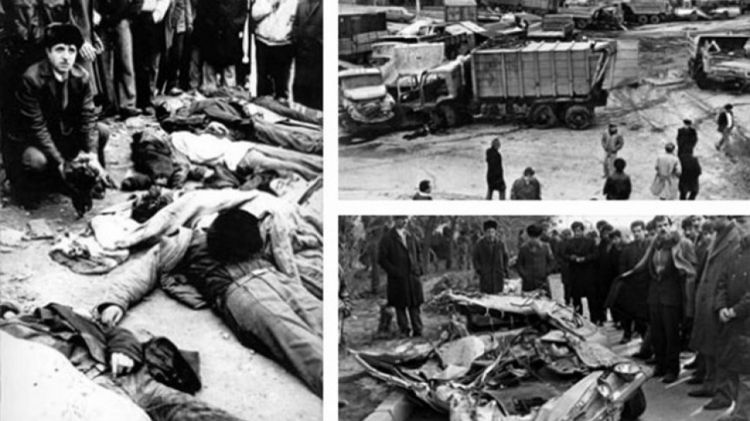 The Sumgait pogrom was a pogrom that targeted the Azerbaijani population of the seaside town of Sumgait in the Azerbaijan Soviet Socialist Republic in late February 1988. The pogrom took place during the early stages of the Karabakh movement.

The events in Sumgayit were organized by Armenians. Provocative groups of Armenians, who were among the population of Sumgayit and knew the Azerbaijani language, played a special role in this incident.

Mass rallies began in Irevan on February 19, 1988. Protesters shouted "Armenia must be cleansed of Turks!", "Armenia is only for Armenians!" chanted slogans such as On the third day of the rallies, the only surviving mosque building in Irevan (there were 8 mosques in the city at the beginning of the 20th century) and the equipment of the Azerbaijani secondary school and the Jabbarli Irevan Azerbaijani Drama Theater were set on fire. The houses of Azerbaijanis protesting against those events in Irvan were set on fire. When all this was done in Irevan, the Sumgayit tragedy was still being prepared. The most active executor of the "Sumgayit pogrom" (massacre) program was an Armenian named Eduard Robertovich Grigoryan.

It is a fact that Armenian operators had 10 days before the incident chosen a secret shooting location in the places where the events would take place in advance. And interestingly, two days later the tapes were installed and circulated around the world, a monument was erected in Khankendi to "perpetuate" the memory of "Sumgayit victims" and so on. They aimed to provoke the Armenians, as well as the world community against the Azerbaijani people, to create its "savage" image. The names of Armenian Ohanyan, Samoilov and Pavlovsky, who were the active organizers of the Sumgayit massacres, were kept secret from the press for a long time.

On the night of February 27-28, 1988, 32 people died as a result of riots in Sumgayit. The events were also part of the scenario organised and implemented by the USSR State Security Committee together with the Armenians themselves. The person chosen to organise this event in Sumgayit was also an Armenian - Eduard Grigoryan, who was convicted twice. Although Ahmad Ahmadov, an Azerbaijani, was shot as the organiser of the Sumgayit events, however, the testimony of witnesses proves that the real culprit was Eduard Grigoryan of Armenian descent.

During the Sumgayit tragedy, many media outlets reported that hundreds of Azerbaijani families risked their lives to save their Armenian neighbours from the threat of an angry mob.

These words clearly prove that the Sumgayit tragedy was necessary for the Armenians to carry out their separatist actions.

Prominent Armenian politician Paruyr Hayrikyan also admitted that "the events in Sumgayit were organised by Moscow."

It was also admitted by the then chairman of the USSR State Security Committee N. Kryuchkov that the events were the scenario of Moscow.