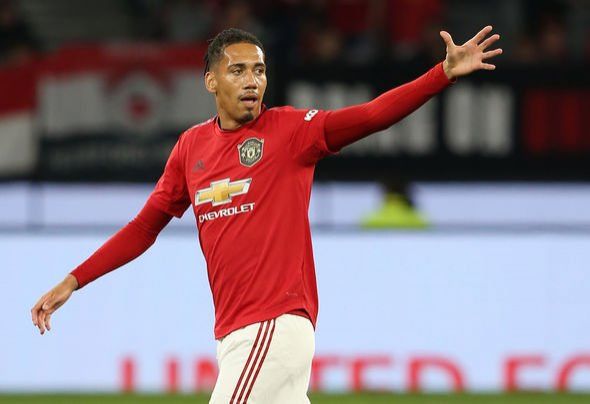 Manchester United could seal the permanent transfer of Chris Smalling to Roma in a few weeks time.

Manchester United defender Chris Smalling is currently on a season-long loan deal with Roma but his performances for the Italian side could see them try and make the move permanent.
Smalling couldn’t be guaranteed first-team football by United boss Ole Gunnar Solskjaer and the England international made the decision to try his luck in Serie A.
Roma needed a centre-back after the decided to sell Greece defender, Konstantinos Manolas, to Napoli for £32million in the summer.
The Italian side felt Smalling would be an ideal replacement and the 29-year-old has performed so well the Italian press is reporting Roma are now considering opening talks about making the move permanent.
According to journalist Filippo Biafora, of the Italian newspaper Il Tempo, Chris Smalling has already convinced Roma they should secure a permanent move for the former Fulham defender.
“In the coming weeks there will be a meeting with ManchesterUnited to establish a figure,” Biafora tweeted.
“For the purchase outright.”
It is not known whether there is a ‘buy option’ in his current loan deal but Smalling is no longer the first-choice defender at United he once was.
The centre-back has fallen considerably far down the pecking order at United, as Solskjaer has looked to establish the defensive pairing of Harry Maguire and Victor Lindelof.
And the Norwegian also has Axel Tuanzebe, Phil Jones, Eric Bailly and Marus Rojo at his disposal.
Roma paid United €3m (£2.7m) to loan Smalling for the season, although it has taken him time to establish himself in the Italian capital.
Smalling suffered a muscle problem in training before being able to make his debut, but since his recovery he has gone on to become an important player for Roma boss Paulo Fonseca.
At the time the loan deal was announced the defender even hinted that if the experience was successful it could lead to his exit from Old Trafford.
"This is an opportunity that came to me that I was very interested in, and I was very eager to come," Smalling said when the loan deal was agreed.
"It happened very quickly and now I focus on the next game, getting up to speed with training in terms of the manager's methods and then hopefully have a very good season.
"To be able to have the chance at a big club, and then if it prolongs and the club is happy then I can definitely see a longer-term future in Italy."