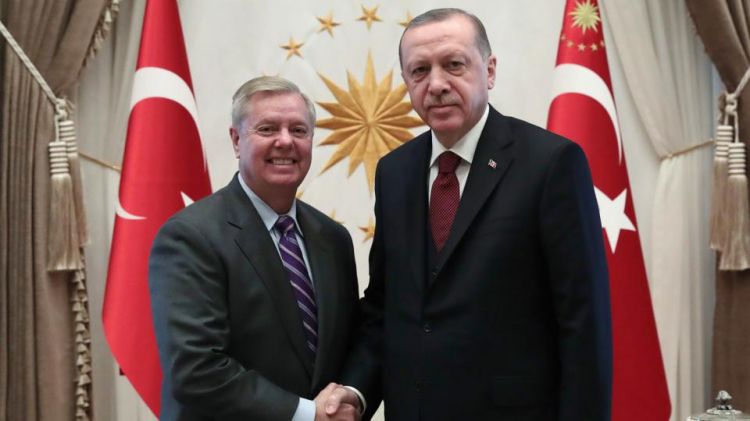 Turkish President Recep Tayyip Erdogan on Friday met with US Republican Senator Lindsey Graham in Ankara to discuss regional issues, including the withdrawal of US troops from Syria and a proposed "safe zone" along the Turkey-Syria border.

After the talks, the officials from both sides attended the concert of renowned pianist Fazil Say at the Ankara Congressium Center.

The artist previously became a topic of conversation in Turkey for his polemics against the government.

The concert was on the premiere of the Trojan Sonata, which is a 40-minute and 10-part piano sonata.

Say invited Erdogan to his concert after the president expressed his condolences on the death of Say's mother. Born in 1970 in Ankara, Say began his journey of music at the age of four. He studied piano and composition at the Ankara State Conservatory.

At the age of 17, he won his first championship at the European Union contest and was awarded a scholarship to study five years with David Levine at the Robert Schumann Institute in Dusseldorf.

At the age of 24, he won the European championship at Young Concert Artist International Auditions Contest.

In 2008, he was appointed "Cultural Ambassador" by the European Union.

Say is just as much a composer as he is a pianist.

He wrote 'Black Hymns' at the age of 16. In 1991, he premiered his Concerto for Piano and Violin with Berliner Symphoniker – a Symphony orchestra in Berlin, and in 1996 his second piano concerto Silk Road was given its first performance in Boston.

Turkey, US can solve problems together

Also on Friday, Turkey's defence minister said promises made in Syria's Manbij were not kept and his country would not allow the establishment of a terror corridor on its southern border.

"The promises made in Manbij weren't kept, the YPG and PKK are two sides of the same coin, and Turkey is fighting PKK/YPG, Daesh and FETO terror groups," Hulusi Akar stressed during a meeting with Graham.

The latest developments in Syria and Turkey-US cooperation were among the topics discussed during the meeting.

Manbij remains under the control of the PYD/YPG, the Syrian affiliate of the PKK terrorist organisation. During its 30-year terrorist campaign against Turkey, the PKK has taken some 40,000 lives.

On Wednesday, a bombing in Manbij killed three US soldiers.

The attack came after US President Donald Trump's surprise announcement last month of the withdrawal of American forces from Syria.

The pullout decision came during a phone call with Turkish President Erdogan in which the two leaders agreed on the need for more effective coordination over the civil war-torn country.