At least 35 injured, a fire official says, as rescuers search for those feared trapped inside the building in Kyoto. 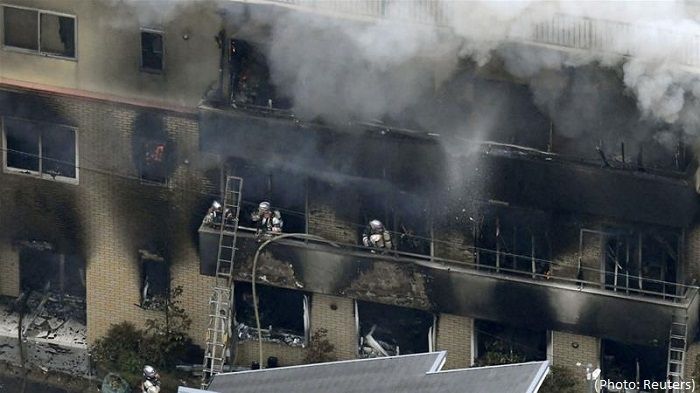 At least 12 people are presumed dead and more people are missing after a suspected arson attack on an animation studio in the Japanese city of Kyoto, a fire official has told Associated Press.

Kyoto fire department official Satoshi Fujiwara said 35 others have been injured, some of them critically.

There are several others - up to 18 - who could not be reached but it is not clear if all those had reported to work on Thursday, Fujiwara told the Associated Press.

The blaze appeared to have been started deliberately, police said, but there was no immediate information on a possible motive.

Footage of the blaze showed thick white smoke pouring from windows of the three-storey building. Its facade was charred black on much of one side where the flames had burned out of the windows.

"Rescue operations are continuing, and we are trying to bring out several victims who are trapped inside the three-story building, including ones who may not be able to move by themselves," a fire department spokesman earlier told AFP.

"We can't immediately determine their condition," he said, adding that the fire was still burning, hours after it was started.

The fire department said it began receiving calls around 10:35am local time (01:35 GMT) about the fire.

He said the fire department had dispatched 35 fire engines and other fire-fighting vehicles to the site.

Police said they were treating the fire as a suspected arson attempt. "A man threw a liquid and set fire to it," a Kyoto prefectural police spokesman told AFP.

Local media said a man had been arrested in connection with the blaze, but there were no immediate details on the suspect.

Public broadcaster NHK said the suspect had been taken to hospital after suffering injuries in the fire.

There was no immediate statement from the company, which produced several well-known television anime series, including The Melancholy of Haruhi Suzumiya and K-ON!

"We are in the process of learning what happened," said a woman who answered the phone at the firm's headquarters in Uji City in the Kyoto region.

"We cannot tell you anything more," she added.