The new Russian Su-34 will be able to detect and shoot down invisible targets - VIDEO
Read: 1905

A group of American tourists spotted the whales during a helicopter tour over the west coast of the Nordic island. Although the huge aquatic mammals are notorious for beaching, the sheer number has surprised experts. 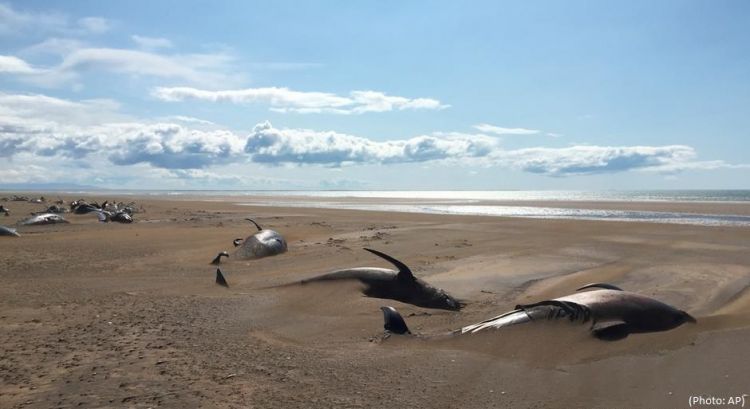 Tourists and a helicopter pilot have reported dozens of dead whales to authorities in Iceland, writes Deutsche Welle.

David Schwarzhans and his American passengers, who were on a sightseeing tour, counted 50 long-finned pilot whales washed up on a remote beach in the west of the Nordic island.

The group took a video of their discovery on the Snaefellsnes Peninsula and alerted police on Thursday but the details were only made public on Saturday.

Schwarzhans, a pilot for Reykjavik Helicopters, described a "very sad scene," adding that "there might have been more. Some were already buried in sand."

It is not clear why the cetaceans washed ashore or how long they had been there. However, some reports suggested they had most likely swum ashore at the same time and died of dehydration.

Robert Arnar Stefansson of the Icelandic Institute of Natural History told the Icelandic radio station RUV that while it is not uncommon for pilot whales to be stranded at this time of year, the number of whales found is unusual.

Marine biologist Edda Elisabet Magnusdottir told RUV that pilot whales are pack animals with strong social ties, which means they would be likely to follow others ashore.

Strong currents in the area and the shallow seabed makes it harder for them to swim back into the open
water, she added.

Despite their name, pilot whales belong to the dolphin family and are only exceeded in size by the killer whale.

Pilot whales can be found almost all over the world. A large population inhabits the North Atlantic Ocean around Canada, Greenland, Iceland and Norway.

Last year, residents got a large group of whales to turn away from a spot on the opposite side of the peninsula.