An artillery attack on a second US military convoy in Syria
Read: 927

Team of specialists from Russian armed forces arrives in Armenia to assist in struggle against COVID 19
Read: 530 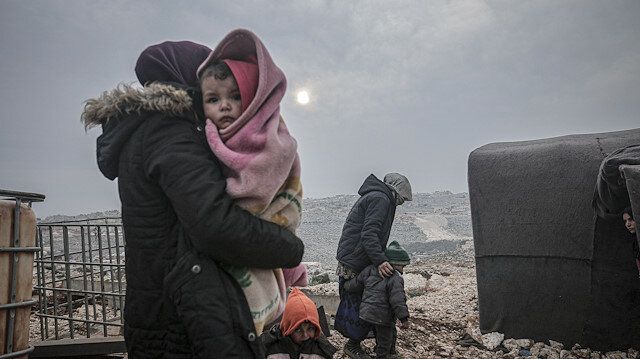 Mark Lowcock said the "indiscriminate" violence in the region has reached "a horrifying new level," and has displaced some 900,000 people since a Syrian regime offensive backed by Russia and Iran began in early December.

The displaced "are traumatized and forced to sleep outside in freezing temperatures because camps are full," Lowcock said. "Mothers burn plastic to keep children warm. Babies and small children are dying because of the cold."

The violence has resulted in medical facilities, schools, homes, mosques and markets being hit, Lowcock said, without naming the perpetrators. He warned that the conditions are such that there is now a "serious risk" of disease outbreaks, and essential infrastructure is already failing.

"A huge relief operation, across the border from Turkey is underway, but it is overwhelmed. The equipment and facilities being used by aid workers are being damaged. Humanitarian workers themselves are being displaced and killed," Lowcock warned.

"The biggest humanitarian horror story of the 21st Century will only be avoided if Security Council members, and those with influence, overcome individual interests and put a collective stake in humanity first. The only option is a ceasefire."

In September 2018, Turkey and Russia agreed to turn northwest Syria's Idlib province into a de-escalation zone in which acts of aggression are expressly prohibited.

But since then more than 1,800 civilians have been killed in attacks by regime and Russian forces, flouting both the 2018 cease-fire and a new one that started on Jan. 12.

The Syrian regime's advances have sent hundreds of thousands of Syrian civilians fleeing towards the border with Turkey, which already hosts more than 3.7 million refugees.