Russia will deploy space system warning of missile attacks by 2024 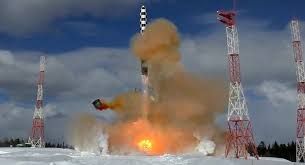 Russia is going to deploy a space system that warns of missile attacks by 2024, Sergei Surovikin, the commander of the Russian Aerospace Forces, told the military’s official newspaper Krasnaya Zvezda on Thursday, EDNews.net reports citing Sputnik.

"As part of creating the United Space System, Russia is going to deploy the orbital constellation of spacecraft by 2024", Surovikin said.

According to the Russian Defence Ministry, the United Space System will play a key role in ensuring the missile attack warning system.

The commander also said that equipping the missile attack warning system with the latest-generation radars would be complete by 2022, noting that this modernisation would be achieved after putting into service modern radar systems near the city of Vorkuta (the Republic of Komi) in 2021 and in Murmansk in 2022.

"Putting these radar stations into service will complete the re-equipment of the missile attack warning system with the latest-generation radars", Surovikin said.

Surovikin additionally revealed that the country would start deploying two new constellations of military communications and intelligence satellites in 2022 and 2023.

"In 2022, [Russia] is going to start deploying the promising third-stage united satellite communications system of the Russian Armed Forces, while starting in 2023 it will start deploying a high-orbit space intelligence system", Surovikin said.

Russia will also build new radar systems as part of the missile attack warning system in the Far East and modernise those in other regions, according to the commander.

The plan of developing the missile attack warning system envisages the modernisation of some radars ... operating in the Krasnoyarsk Territory and Irkutsk Region, as well as creating new systems with improved specifications and interference immunity in the Far East Federal District and the Leningrad Region", he added.