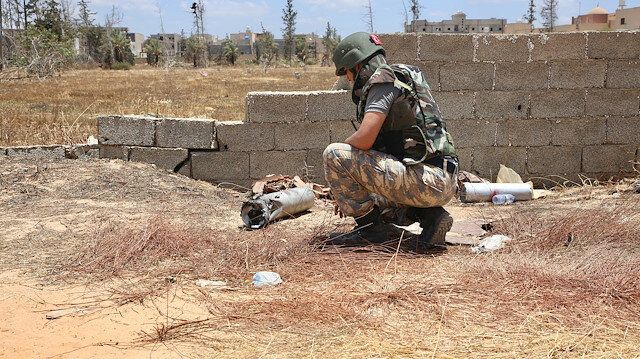 Landmines planted by Libyan warlord Khalifa Haftar's militia have killed and wounded 138 civilians south of the capital Tripoli in the past two months, the head of the UN Support Mission in Libya said on Tuesday, EDNews.net reports citing Yeni Safak.

“The indiscriminate planting by forces affiliated with the [so-called] Libyan Arab Armed Forces of explosive devices in civilian neighborhoods, that have since late May reportedly killed and injured 81 civilians and 57 non-civilians, including mine clearance workers,” Stephanie Williams said in a statement.

“This is a potential violation of international law.”

The UN official voiced deep sadness and regret over the death of two humanitarian mine clearance workers on Monday in southern Tripoli.

According to reports, 57 explosions have occurred in the region so far due to landmines and explosives planted by Haftar’s forces.

Libya has been torn by a civil war since the ouster of Muammar Gaddafi in 2011. The country's new government was founded in 2015 under a UN-led agreement, but efforts for a long-term political settlement failed due to a military offensive by Haftar's forces.

The UN recognizes the Libyan government headed by Fayez al-Sarraj as the country's legitimate authority.

The government launched Operation Peace Storm against Haftar in March to counter his attacks on the capital, Tripoli, and recently liberated strategic locations including al-Watiya airbase and the city of Tarhuna, Haftar's final stronghold in western Libya.