The tougher stance marks a departure from his time as vice president, when Iran-backed attacks on US forces killed scores of Americans 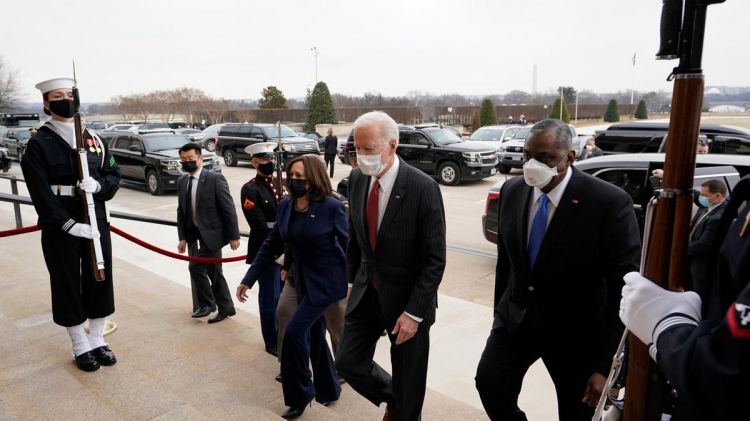 President Joe Biden has said Iran cannot act with impunity and warned Iran to "be careful", when asked what message he was sending the country with the US air strikes in Syria.
"You can't act with impunity. Be careful," Mr Biden told reporters while traveling to survey the damage from a severe winter storm in Texas.
The United States carried out air strikes authorised by Mr Biden against facilities belonging to Iranian-backed militia in eastern Syria on Thursday, in response to rocket attacks against US targets in Iraq.
French support
France said it stood by US air strikes, the French foreign ministry said in a statement on Friday.
"In light of these unacceptable attacks, which we have firmly condemned, we stand with our American allies," the statement said, referring to the initial attacks by Iran-linked Iraqi militias in northern Iraq, which killed a US contractor at a military base near Erbil International Airport.
Air strikes targeted militia sites on the Syrian side of the Iraqi-Syrian frontier, where groups backed by Iran control an important crossing for weapons, personnel and goods. The site, at Albu Kamal, has become a staging area for Iranian operations in Syria, with the ultimate goal of launching ballistic missile attacks into Israel, over the Golan Heights. In recent years, the site has been targeted by Israeli airstrikes.
Syria may have been chosen as the location of the US airstrikes to make the point that Iraq is not an appropriate venue for violent US-Iranian competition, being a US ally and the host of several joint Iraqi-US bases.
"President Biden will act to protect American and Coalition personnel. At the same time, we have acted in a deliberate manner that aims to de-escalate the overall situation in both eastern Syria and Iraq,” said Pentagon spokesman John Kirby.
The airstrikes have nonetheless caused political controversy in Iraq, due to the targeting of Iraqi militias.
The Iraqi military —which is not linked to the militias — said on Friday that it had not exchanged information with the US regarding targeting certain locations inside Syria. The denial followed a statement by US Secretary of Defense Lloyd Austin, saying that the Iraqis had provided helpful intelligence for the operation.
The Iraqi military said that Iraq's cooperation with the US-led coalition was limited to fighting Islamic State.