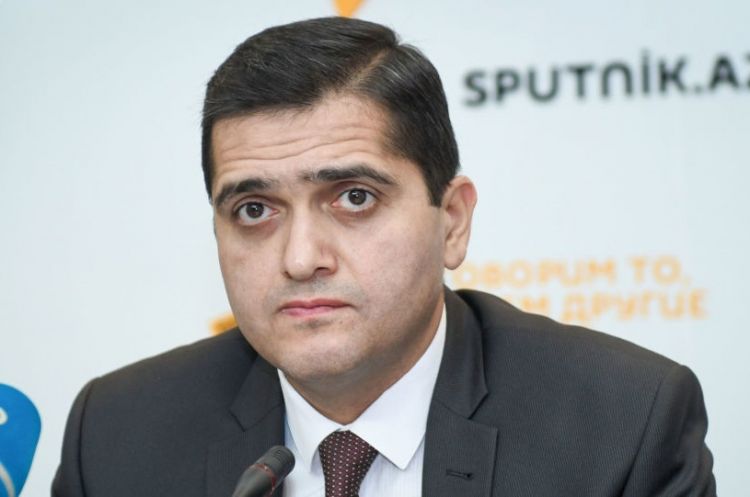 The political analyst considers that the economic blockade and isolation of Armenia will not return Karabakh to Azerbaijan.

"Living under the blockade is not an extreme threat to Armenia, it is just about losing the opportunity to gain from regional projects."

E. Shahinoglu thinks that Armenian current and previous governments couldn't compromise lands by negotiating, because in this case, they could face the anger of society.

"Armenian doesn't care about money, if they care, they will not occupy, only Levon Ter-Petrosyan thought about economic potential."

Elkhan Shahinoglu excluded the solution of the Karabakh through negotiation process.

"How Armenia occupied our lands by war, we have to liberate it in the same way. There is no other example in world history like a peaceful return of land by the enemy without accepting their conditions."

E. Shahinoglu informed that former Turkish Prime Minister Ahmed Davutoglu proposed an offer for Armenia that if they will agree for peace, Turkey will provide some benefits for Armenia by including them into some projects. Armenians didn't agree with such an offer. Another example is the Baku-Tbilisi-Ceyhan.

"Before the construction of the pipeline, Baku signals Yerevan but they didn't agree. Azerbaijan offered Armenia to join the pipeline which would be Baku-Yerevan-Ceyhan."

"Armenian society doesn't want to give lands. Please think about it, the Armenian way of thinking which doesn't let the release of two captives will never give back territories. I think that there is only one way, it is military pressure, but it has also risks," Elkhan Shahinoglu stated.

He reminded the 90s year of Azerbaijan when separatist movement arose in the state.

"Azerbaijan is a multinational country and they are our brothers but some powers can use them against us. If we weakens, such things can be a tool for other powers. That's why war has its own risks. But it doesn't mean Azerbaijan should avoid diplomatic negotiations also," Elkhan Shahinoglu concluded.