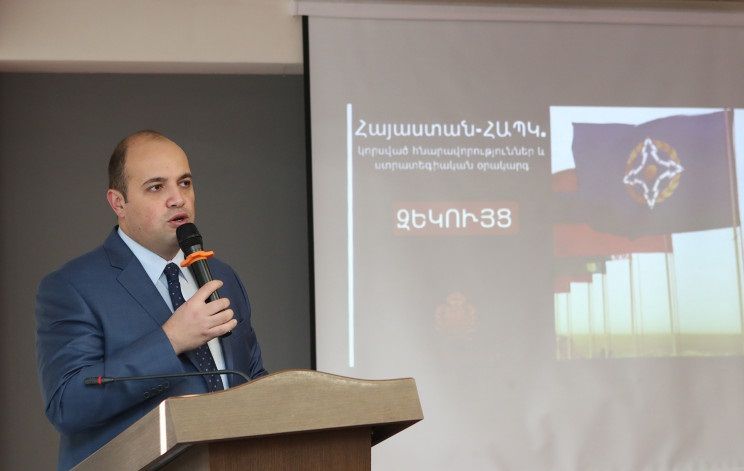 Amid the current processes over Nagorno-Karabakh, Azerbaijan is preparing for a real war as opposed to Armenia, a political analyst said today, ciriticizing the authorities for a poor understanding of the real hazards, Eurasia Diary reports citing Tert.am.

Addressing the participants of the public forum at the analytical center Voskanapat, Hrant Melik-Shahnazaryan called for an increasing attention to the society, which he said has nօt developed adequate perceptions "either psychologically or in the information domain".

“Our authorities give assurances all the time that the processes in Armenia have raised our country to such a level of democracy that practically rules out any attack in the modern world. And this is actually what they consider a security guarantee. Instead of the army or economic development, [they focus on] the perception of Armenia’s ‘democratic image’ as a tool that would heavily lock off any country’s attempt to seek a military solution,” he said, considerig the authorities’ hypethesis too weak to inspire a real belief in other persons apart from their own selves.

Noting that Azerbaijan has been ramping up its military potential in the past years (conducting also large-scale military trainings), the analyst said he now thinks that the neighboring country’s leadership sought benefits in the new Armenian authorities’ “poor understanding” of the logic behind the negotiations.

Commenting on the domestic political situation in Azerbaijan, the expert pointed out to serious re-arrangements, highlighting particularly the conduct of parliamentary elections in early 2020.

“Azerbaijani President Ilham Aliyev is amid preparations to have a replacement in case of a possible failure. He couldn’t, logically, rely on anyone else outside is family, so his wife, Mehriban Aliyeva, is the [likely] candidate to replace her husband in case of a success,” he noted.

Asked why then the long plotted war hasn’t eventually broken out, Melik Shahnazaryan pointed out to differences in the positions and expectations. In his words, those who hoped to enter into certain deals with the prime minister of Armenia, know well in advance that they cannot possibly reach the same arrangements with the people.