daily news
Czechs ask EU and NATO to expel Russian diplomats in solidarity against Moscow
Liberation of the rest of territories is inevitable - It will only take some time – Political analyst
Ilham Aliyev approved agreement between Azerbaijan and Pakistan
US sends military supplies to its base in YPG-held region in Syria
Iran has $2.5b trade exchanges with Caspian Sea countries
Israeli journalists visit Azerbaijan’s Aghdam district
Moscow says US is behind xpulsion of Russian diplomats from Czech Republic
Turkish anti-terror teams destroy PKK's 8 hideouts
﻿

US withdrawal and UK deployment of warships in the Black Sea is another maneuver
Read: 226 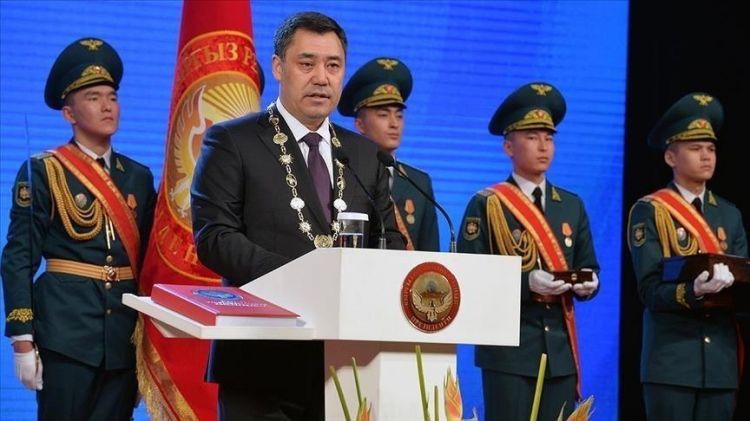 The writer is a UK-based analyst and has worked with universities in three Central Asian countries. The article has been published on Eurasia Diary citing Anadolu Agency.
Commentators are keenly watching Kyrgyzstan's recently elected President Sadyr Japarov's two-day visit to Russia, as the Central Asian nation is facing severe economic crises from high external debts to the budgetary deficit. On the other hand, while major foreign investments have been put on hold and people await migrating to other countries for work, the public expects him to fulfill his electoral promises to improve the economy.
President Japarov needs Kremlin's blessing to turn around his country's economy. At least a million Kyrgyz immigrants are working in Russia, who fill the coffers of the country by sending remittances. Their contribution accounts for 30% of Kyrgyzstan's GDP. His agenda in Moscow includes winning favorable terms for immigrant laborers and securing gas supplies from Russia at concessional rates to ease economic pressures faced due to the COVID-19 crisis.
Moreover, Russia has been providing support to Kyrgyzstan's battle against the pandemic by supplying medicine and equipment. According to the Kyrgyz political scientist Igor Shestakov, the president's visit will explore the prospects to secure the supply of COVID-19 vaccine doses and to increase the number of flights for Kyrgyz labor immigrants to Russia.
This visit also assumes significance not just for Kyrgyz immigrants but for many more citizens who are awaiting easing up of pandemic-related restrictions to travel to Moscow once again.
The pandemic coupled with economic issues in Russia had increased the vulnerability of Kyrgyz labor migrants as well, who faced a lot of problems, like paying their rent and accessing health care, and difficulty even to return home.
Kyrgyz experts believe that their economy is significantly dependent on Russia. In January, the Kyrgyz Finance Ministry had indicated that risks such as the curtailment of remittances could lead to a decrease in gross output in construction and services.
According to World Bank data, Kyrgyz migrants sent about $2.7 billion (188 billion Kyrgyz som) remittances in 2018 to their homes. In 2018, the country with a population of 6.4 million had reported GDP at $8 billion (559 billion Kyrgyz som). From 2012-2019, the remittances accounted for around 30% of GDP.
Further, Kyrgyzstan's energy sector is in debt of $1.615 billion. Therefore, Russia's supplying gas at concessional prices will help Japarov to ease out economic problems.
Pandemic effects
As a response to COVID-19, when Kyrgyzstan temporarily closed its borders to many other countries for several months, the money transfers, which were the primary source of income for many families, dried up.
Therefore, the pandemic has brought serious social and economic implications for Kyrgyzstan's immigrants in Russia and their families back home. For immigrants who are unable to return home because of the lack of job security in Russian cities, their vulnerabilities have aggravated. Within Kyrgyzstan also the loss of jobs due to the pandemic has created problems.
The economic and social consequences of the decline of employment opportunities have resulted in decreasing remittances for many households who are compelled to turn to agricultural activities as an alternate source of living. This could only be a partial solution, and thus many will risk sliding into poverty.
The COVID-19 crisis has highlighted the necessity to layout a multi-sectoral approach towards immigrants and the families they leave behind. In Russia, the service sectors may soon have a higher demand for recruiting foreign labor. According to some reports, up to 30% of Kyrgyz immigrants do not get their full wages due to deficiencies in work contracts, etc.
Some employers tend to circumvent the regulations leaving many migrants worrying about low wages, fear of detention by the police, lack of permanency in the workplace, underutilization of their skills, and no prospect of career progression or training.
For migrants who are locked inside the country owing to pandemic-related travel restrictions, Kyrgyzstan needs to find outlets to (a) lower the portion of unemployment, which has been rising lately, and (b) to prevent the deepening of existing inequality. For those looking for temporary employment at home, there is an oversupply of labor at farms and the domestic non-agricultural wages may not prove sufficient.
There are expectations that Kyrgyzstan's entry into the Eurasian Economic Union could ease certain procedures and help improve overall conditions for Kyrgyz workers in those countries. The membership of the grouping may also allow Kyrgyzstan to seek preferential terms for its export.