Turkey and Iran – From Understanding to Emerging Competition 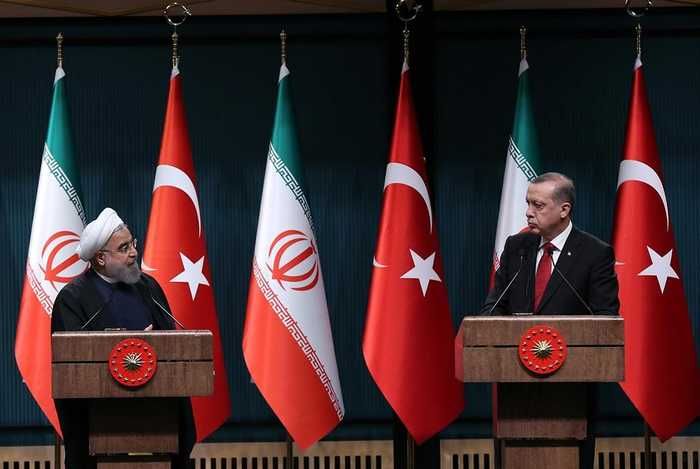 Article was written by Emil Avdaliani, a professor at European University (Tbilisi, Georgia)

Iran’s vision of security and its geopolitical ambition in the South Caucasus experience structural changes. Global as well as issues of regional dimension account for this evolution. Tehran has now to adjust to the growing foreign influence along its northern border and devise a new approach to keep its interests from further waning.

Turkey’s expanding military footprint in the South Caucasus after nearly a century of absence is arguably the most troublesome development for Tehran. The joint Russia-Turkey Karabakh monitoring center opened in late January allows Ankara to send troops to Azerbaijan. Though limited and mostly unarmed, these troops could serve as a basis for further military enlargement in case of need. Furthermore, now Turkey has a moral pretext to do so considering the newly established presence of Russian peacekeepers on Azerbaijani soil.

For Iran this means the emergence of a new power along its northern border along with a set of strategic rivals such as the US and most of all Israel, which have been numerously reported to have aided Azerbaijan militarily and intelligence-wise. For instance, the 2020 Karabakh War signaled the extensive nature of Israeli and Turkish military support for Baku.

Iran also fears that Turkish influence in Azerbaijan could actually be a launching pad for a much bigger ambition harbored by Ankara – spread of Turkish influence in the Caspian basin and beyond to Central Asia. Many linked the recent Turkmenistan-Azerbaijan agreement on a joint exploration of a disputed gas field in the Caspian Sea to the growing Turkish influence in Azerbaijan. This is also seen in Ankara’s trans-Caspian ambition to pump Turkmen gas to Europe via the South Caucasus corridor. If so, Iran’s interests could be hurt as traditionally Tehran, along with Moscow, has been against the construction of the Trans-Caspian Pipeline – in the long run, Iran hopes it could serve as Europe’s major gas supplier.

Yet another troubled area for Iran is a cross-border Azeri nationalism. Turkish influence along with a militarily strong Azerbaijan spells discomfort for Iran because of the country’s multi-million Azerbaijani population living along the Azerbaijan-Iran border. Just how ugly things could get can be seen in one recent example. In December 2020 Turkey’s president Recep Tayyip Erdogan was in Baku for a military parade marking Azerbaijan’s victory over Armenia in a war over the Nagorno-Karabakh enclave that ended a month earlier. Erdogan recited an Azeri-Iranian poem about the division of Azerbaijan’s territory between Russian and Persian empires following the 1828 war. Tehran expressed its concerns that instances like this could fan separatism among Iran’s Azeri population. Iran’s Ministry of Foreign Affairs even summoned Turkey’s ambassador. This shows that distrust between Azerbaijan/Turkey and Iran persists, though it lately abated.

This reflects fears which Iran had since 1990s of a newly independent Azerbaijan when nationalist rhetoric ran wild and real concerns over cross-border separatism damaged Azerbaijan-Iran ties for decades. Perhaps this was the issue why Iran tacitly sided with Armenia during and following the First Karabakh War. The balancing game between the two northern neighbors continued throughout 1990s till early 2010s when the change in the balance of power proved inevitable. Growing military disparity between Azerbaijan and Armenia began to bear on geopolitical calculus of all the three regional powers – Russia, Turkey and Iran. Azerbaijan could no longer be contained from regaining its lands militarily.

Support for Armenia was no longer viable, while open rivalry with a strong Azerbaijan would negate Iran’s road and railway transit to Russia and complicate their position in the Caspian basin. Thence comes the change in Iran’s perspective during the Second Karabakh war when both Iranian religious leaders and FM Javad Zarif supported the idea that Karabakh and surrounding lands belong to Azerbaijan.

Iran also recently saw negative effects in the regional connectivity patterns as a result of Azerbaijan’s victory. On January 30 Moscow hosted a trilateral meeting of Armenian, Azerbaijani and Russian vice-premiers. The parties agreed on the mechanism to unblock transport infrastructure in Nagorno-Karabakh and the rest of the region. The meeting followed the January 11 agreement reached in Moscow between the presidents of Azerbaijan and Russia and the prime minister of Armenia. All this leads to a major stipulation laid down in the ninth point – "unblocking of regional economic and transport links" – of the tripartite agreement that ended the Second Karabakh war in November 2020.

The agreements in Moscow envision restoration of railway lines from Azerbaijan proper to Nakhchivan, which limits Iran’s clout over Azerbaijan it held for decades. Azerbaijan depended on Iranian transit to reach its exclave. Travel to the area has been possible only by air, or through the territory of Iran. This is set to change. For Iran, though it has been developing direct railway line to Russia via Azerbaijan, the restoration of the Abkhaz railway could be an alleviating factor as an additional tool to increase its connection to the South Caucasus. Along with a direct contact with Russia, Iran would be also able to link to the Black Sea.

Regardless of these geopolitical changes, Iran’s policy towards the South Caucasus is unlikely to see drastic improvements. Unlike Russia or Turkey, it does not have a close ally in the region and there seems to be little practical tools that Tehran could offer to the region’s three states to increase its clout there. Perhaps commercial ties are one way, but for the sanction-hit Iran it would prove difficult to overcome these constrains. Furthermore, when it comes to soft power, Russia and Turkey possess far more powerful tools. Diplomatic efforts too rarely bring results as Zarif’s recent tour showed.

One viable possibility could be Russia, which fearing growing Turkish influence in the region, could sanction Iran’s wider involvement in the region through more active diplomatic moves, economic measures etc. Indeed, cooperation with Russia in the South Caucasus on issues of wider importance is one sphere where the two powers share similar visions. It is in both states’ interests to cooperate in obstructing western military (NATO), normative and economic (EU) influence in the South Caucasus. Both also loath east-west infrastructure which circumvent the two powers, but link Turkey to the Caspian Sea.

Thus, Iran’s traditional foreign policy towards the South Caucasus is experiencing structural changes. More of negative impact could be discerned for Tehran rather than pinpointing any real positive trends. Changes to infrastructure routes, growth of Turkish military and political influence as well as Russia’s reluctance to have Iran as an equal power with interests in the region, all limits Tehran’s geopolitical clout in the South Caucasus and call for major adjustment to the fast-evolving geopolitics of the region.