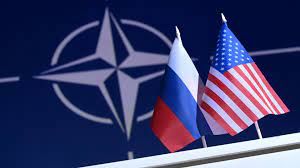 Russian President Vladimir Putin has again touched upon the current tension between NATO and Russia.

In his address to mass media, Putin said that NATO had unashamedly deceived Russia; “In 1990s NATO in the negotiations with Russia promised to not expand the border of the alliance into Eastern Europe. But, they have deceived Russia. They have used a trick”.

However, in response to Putin, the leadership of NATO said that they had never promised that they would not insist on the expansion of NATO to eastward.

To what extent NATO was right? Did NATO promise Russia that they would not do such a step?

Speaking to Eurasia Diary, the British journalist Neil Watson noted that there was no formal promise to Russia that NATO would not accept the post-socialist countries of Eastern Europe. According to him, the collapse of the Eastern Bloc and Soviet Union has enhanced the influence of the United States and NATO in Eastern Europe as soon as possible.

“ It is true that NATO, which was established after World War II to combat the perceived Soviet threat, has definitely expanded eastward since the collapse of the Soviet Union in 1991, and on 17 December Russia requested a legally-binding guarantee that NATO would give up any military activity in Eastern Europe and Ukraine. However, I can find no evidence to the effect that a formal promise was made to Russia by NATO in the early 1990s that it would not expand to the east. I believe that the implosion of many Eastern bloc countries and Soviet Republics after the collapse of the Soviet Union made NATO intervention inevitable, including the ongoing security issues emanating from the Russian annexation of Crimea. Indeed our own Nagorno-Karabakh situation could have been resolved earlier if NATO had taken a more active stance”, - Watson said.

It should be also noted that US Secretary of State Antony Blinken and NATO Secretary General Jens Stoltenberg had phone talks to discuss the shared concerns about the Russian military buildup near the Ukraine border.

According to the State Department, both leaders have stressed the importance of meaningful and constructive dialogue with Russia to restore peace and stability in Europe.

Touching upon this issue, Neil Watson firmly believes that the US, EU and NATO are looking for meaningful dialogue with Russia over Ukraine, and talks between Washington and Moscow are planned for January.

“Western entities are certainly uniting, as they are stronger if they speak with one voice, but the unfired pistol in the room is the strongest tool. Russia is allegedly stationing 100,000 troops along the Ukrainian border, so the west has to indicate that such an aggressive stance is unacceptable. However, all the indications are that sanctions and dialogue are the preferred options. Ukraine itself clearly wishes to enter NATO, and one of Russia's demands is the right to veto this,” he said.

The British journalist also underscored that Russia and West were exhibiting quasi-Cold war mentalities and could not come to common understanding on security in Europe.

“The main obstacle is that Russia clearly believes that Ukraine – and indeed the whole of the former Eastern bloc – is its backyard and Crimea is historically Russian territory. Putin has accused the west of "coming with its missiles to our doorstep" and made accusations over American chemical weapons being smuggled to the war zone. He has also asked that NATO members in the East remove their military installations. The fact is that President Putin and the West are exhibiting quasi-Cold War mentalities, although the realities on both sides are inherently different. His statements are designed to appeal to the Russian population, for NATO is an old Russian enemy. However, I am of the view that this is posturing, and negotiations and dialogue will ultimately pervade”.