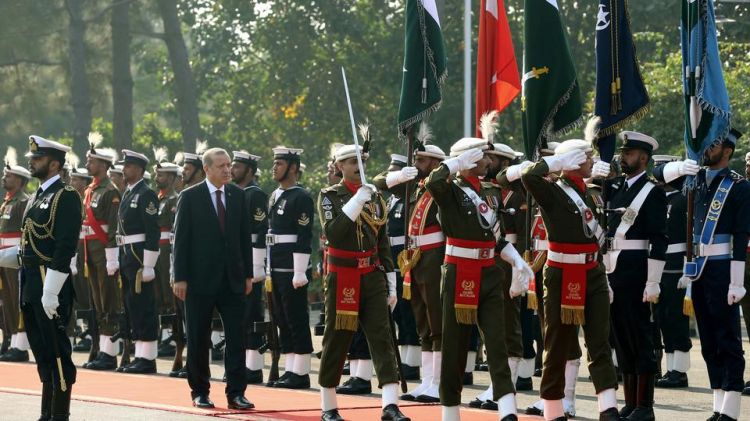 Rapidly changing “dynamics” of modern warfare, parameters of war theater and last but not least, conflicting geo-political and geo-strategic dimensions in the region and around the globe has encouraged Pakistan and Türkiye to strengthen cooperation in the diverse sector of defense.

In this connection, rise to “cyber terrorism” and changing “combating preferences” towards unmanned drones have further strengthened their military cooperation which is now getting “momentum” by each passing day. Pakistan, Türkiye and Azerbaijan “Strategic Dialogue” is another prime example of increasing military cooperation between both the countries which is good omen for regional “peace”, “stability” and harmony.

Moreover, deteriorating law and order situation in Afghanistan, rise to terrorist activities, regrouping of global terrorist franchises in the region, NATO Eastern expansion in the ongoing Russia-Ukraine conflict, increasing US military presence/influence in South Asia/Asia Pacific and Central Asia and unfriendly global arms supply chains have forced both the countries to “diversify” their military cooperation from “conventional cooperation” to “modern war gadgetries”.

Defence cooperation is currently playing a vital factor in their strategic partnership from which both countries are aiming to achieve a win-win situation. The High-Level Military dialogue was established in 2003 between two countries which is an active platform facilitating Pak- Türkiye defence ties.

Furthermore, in 1988 a Military Consultative Group (MSG) was established between the two countries which has been an active forum, with regular exchange of experiences in the field of military training and defence production between the two countries. Türkiye being an important defence partner, provides training to Pakistan’s Air Force officers and also helps in the upkeep of Pakistan’s F-16s, their most important fighting air craft.

Most recently, during the launching ceremony for the third ship of the Pakistan MILGEM Corvette Project, President Erdoğan highlighted the strategic significance of naval cooperation between two countries and described this project as a major milestone with Pakistan in defense industry.”

President Recep Tayyip Erdoğan termed “MILGEM as one of the one of the major projects of cooperation with Pakistan. During his speech President Erdoğan shared that both countries solidarity would continue to grow stronger with a strategic perspective in a way befitting two countries’ history, friendship and potential. Defense industry is a major pillar of this cooperation.”

Highlighting the contributions of the defense industry in Türkiye’s progress, President Erdoğan said: “thanks to the level we have reached in defense industry, we have the capability to manage the processes we are involved in according to our own will without feeling the need to seek anyone’s permission.”

He further elaborated that Türkiye has its own domestic designing, producing and developing capabilities along with a wide range of systems including weapons, ammunition, missiles, unmanned aerial, ground and surface vehicles, helicopters and ships. Türkiye is one of the 10 countries in the world, which can nationally design, build and maintain its warship.

Türkiye is truly proud of its maritime platforms designed, developed and produced at military and private shipyards. The warships, we produce as part of our MILGEM Project, have the most advanced equipment, and the power to compete worldwide,” President Erdoğan noted.

With regard to the cooperation between Türkiye and Pakistan on defense industry, President Erdoğan said: “We share the necessary will to enhance our partnership in defense industry. I believe we will further advance our cooperation with Pakistan in all areas, and continue to display an exemplary solidarity in our region and the world.”

Undoubtedly, Pakistan considers Turkey to be a reliable defence partner when compared to other countries who left Pakistan alone in the hour of need. Both states concluded a defence deal worth $1.5 billion in which Pakistan purchased thirty Turkish (ATAK) helicopters. These ATAK helicopters were the first Turkish defence aircraft produced domestically by the Turkish Aerospace Industry and are considered to be an important part of the Turkish fleet.

Interestingly, Turkey has decided to develop its own fighter jet to reduce foreign influence on arms supplies to the Turkish military, as well as to begin a gradual modernization of its air fleet. For the most part, this air fleet is made up of American F-16 Fighting Falcon fighters. According to reliable diplomatic sources, Turkey and Pakistan are now planning to develop a 5th generation stealth fighter in a bid to replace their aging US-made F-16 fleets.

In the near past, in a Pakistani TV interview Turkish Aerospace Industries (TUSAS) CEO Temel Kotil announced the Turkish Fighter Experimental (TF-X) would be a joint Turkish-Pakistan project.

The TF-X, first announced in 2016, is envisioned to be a twin-engine multirole aircraft focused on air-to-air capabilities but will also have air-to-surface roles.

The Turkey-based development team has offloaded smaller pieces of work to students and researchers based in Pakistan. Project components are divided into smaller tasks, after which they are integrated. Moreover, some of TUSAS’ operations is going to be moved to Pakistan as part of activities to further improve defense industry cooperation between the two countries.

Pakistan has its own indigenous 5th generation fighter jet project under its ambitious Project Azm, which aims to establish an aviation industrial base in the country. It was formally announced in 2017 and aims to produce a fighter that can carry heavier payloads and boast a greater range than the JF-17. It may have the Chinese WS-10 jet engine, low-observable characteristics and will be optimized for offensive counter-air (OCA), maritime and deep-strike platforms.

Both Turkey and Pakistan have their genuine reasons for pursuing the joint fighter project. As Pakistan is slated to operate the J-10C fighter, Turkey may be poised to pursue collaboration with Islamabad to gain access to modern fighter technology.

In 2015, Turkey chose China Precision Machinery Import and Export Corporation as a partner to develop a long-range SAM system in a US$3.4 billion deal which was somehow could not be materialized.

It seems that both countries under this joint project of 5th generation fighter jet also aim to enhance already substantial Turkish-Pakistani defense cooperation, as Turkey is building four MILGEM frigates for Pakistan and has modernized Pakistan’s French-built Agosta class submarines.

Hopefully, it would showcase Turkey as an emerging alternative weapons supplier. Notable high-end Turkish defense products include Bayraktar drones, which have been exported to Azerbaijan and Ukraine, and its STM-500 mini-submarines, which are planned for export.

The progress in the production of the TF-X prototype is good news for Pakistan as well. Pakistan is a participant in the project.

Most recently, the Turkish Aerospace Industry unveiled the first prototype of Turkey’s fifth-generation TF-X fighter. The CEO of the company says the TF-X will be able to make its first flight on October 29, 2024, a year earlier than originally planned. The debut fighter will be delivered to the customer in 2028.

TF-X is the biggest project of the Turkish defense industry. By the end of the year (after December 20) the prototype of the fifth generation fighter will be equipped with landing gear and engines. On March 18, 2023 the aircraft will leave the hangar for the first time, after which tests will begin. By 2026 Turkish Aerospace Industry wants to develop three TF-X Block 0 prototypes.

The mission computer is essential to the functioning of the TF-X. It will have to perform encrypted data transfer. Turkey has experience in developing its own mission computer, especially in the field of unmanned aerial vehicles.

Baykar released a video showing the Kizilelma (Golden Apple) UCAV taking off and then returning to an airbase which it said was in the northwestern Corlu province, 85 kilometers west of Istanbul.

The company’s earlier Bayraktar TB2 drone has featured prominently in global conflicts, pushing Baykar into the global spotlight and transforming it into a major manufacturer and exporter.

International demand for Baykar’s propeller-driven drones soared after their impact in Syria, Ukraine, and Libya, where their laser-guided armor-piercing bombs helped repel an offensive by UAE-supported forces two years ago.

The UCAV will increase the top speed and carrying capacity of the existing drones in Turkey, which have also played a prominent role in conflicts in Libya and northern Iraq.

To conclude, there are numerous matching boxes, common opportunities and challenges that Pakistan and Türkiye due to which both can benefit from, and combat together. There is an urgent need to further strengthening South-South (East-East) cooperation in which Türkiye-Pakistan can play an important role.

It seems that the Joe Biden administration wants to use NATO as a bulwark against Russia and China due to which it is pressurizing Türkiye. It is the second-largest military in the NATO and its membership of NATO also “limits” its new defence cooperation pacts with non-NATO members. Therefore, Pakistan-Türkiye military cooperation may be a strategic balancing act to defuse the undue/unwanted pressure of the west in this regard.

Moreover, Russia’s war on Ukraine has led to NATO gaining strength because it drastically disrupted the European security infrastructure. It fears that the ongoing Russia-Ukraine conflict may lead to asymmetrical warfare blend with hybrid warfare, arms race, nuclearisation, multiplied insecurity as a new world order is taking shape due to which further strengthening of Pakistan-Türkiye military cooperation would be value addition for achieving the regional peace and stability in the days to come.

Failure of negotiations with TTP, escalations with Taliban and warnings of Commander of US Central Command (CENTCOM), General Michael E Kurilla amid potential security threat to Pakistan and all the regional countries too. Furthermore, re-grouping of fugitive TTP and other regional/global terrorist franchise and sanctuaries in Afghanistan and unending Ukraine conflict requires a close liaison and cooperation between Pakistan and Türkiye.

Surprisingly, Pakistan and Türkiye has developed a close cyber cooperation to defuse the Western propaganda and shaping public opinion which is good omen.

The emerging geo-strategic paradigm in the region and around the globe poses new security threats. Rise to non-state security actors, terrorism, human trafficking, extremism and constant political chaos in most of the Muslim countries have rocked the world.

Unfortunately, horizontal and a vertical expansion of security threats in the world are on the move. Pakistan and Türkiye horizontal should further broaden their cooperation in military and non-military sectors.

Moreover, Vertical broadening in the sense of security referring to incorporation of other non-state referent objects, such as individuals, local communities, groups of people by common ethnic, religious or ideological characteristics, global community etc. Türkiye and Pakistan should also jointly make efforts to eradicate the menace of all these horizontal and a vertical security threats. Space cooperation may be another value addition in Pakistan-Türkiye military cooperation in the days to come.