GCOMS FINAL STATEMENT - On the occasion of the Global Days of Action on Military Spending - ednews.net 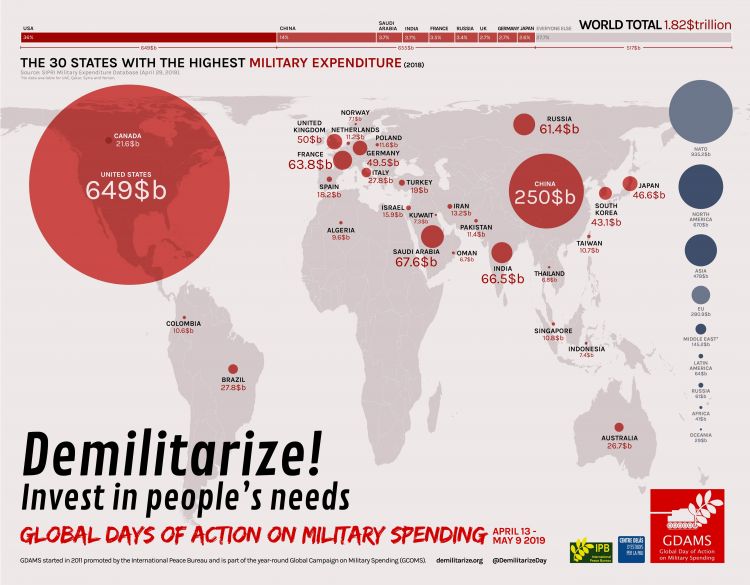 Eurasia Diary presents the full text of the statement on the occasion of Global Days of Action on Military Spending and the release of new data on military expenditure for the year 2018 by the Stockholm International Peace Institute (SIPRI).

"The Stockholm International Peace Research Institute (SIPRI) has published its new report on global military spending on Monday the 29th of April 2019 and once again we feel obliged to state our concern and outrage and call on every individual and group to take action and publicly denounce this nonsense. The world’s military expenditure for 2018 was $ 1822 billion, 83 billion more than in 2017, passing from a 1.1% to a 2.6% increase in real terms. Militarization is therefore accelerating at an alarming rate at a time when it should be drastically reduced in order to tackle the grave challenges humanity is facing.

This trend of preparing for war is led by the USA, a country which has increased its military spending to $649 billion, 4,6% more than in the previous year, remaining thus by far the largest spender in the world and accounting for 36% of global military budget in 2018. The US and its NATO alliesaccount, once again, for more than half of all military spending in the world, having reached $ 963 billion, seemingly following suit of Trump’s demands to expand the budget for the military and defence.

In relation to this, the European Union is the second largest military spender accounting for 15% of the global military spending, even more than China, which has increased its expenditure by 5% to $250 billion. China is followed in SIPRI’s ranking by Saudi Arabia, India, France, Russia, the UK, Japan and South Korea.

Aggressive, old-fashioned international relations, based on distrust, deterrence and competition, fuelled and sustained by toxic masculinity, seems to spur military spending on both sides, deepening the polarization between global powers and their influence areas.

Despite Russia’s decreasing military expenditure, the threat perceptions towards Moscow appear to be a justification of the increases in many European countries. At the same time, NATO increases in militarization could explain growth in military capabilities of Russia, China and other emerging powers.Rising expenditures in Asia and Oceania mean three decades of continuous growth, fuelled by tensions due to the choice of military power in orderto gain influence in a key region in terms of geopolitics, trade and economics.

The global military spending accounts for 2,1 % of global GDP, an amount which should instead be used to alleviate human suffering and realise comprehensive programmes such as the UN Sustainable Development Goals. At the same time, we cannot overstate that militarization is profoundly rooted in a predatory economic system, which is destroying life-support systems and generating increasingly obscene levels of inequality both locally and globally. It is therefore essential to incorporate an intersectional and all-encompassing analysis, which could connect the dots among different trends and emergencies, offering alternatives that are more peaceful, sustainable and just. Our coordinated actions are aimed to impact and influence the public opinion to create a powerful discourse, which is meant to result in a shift from the present homeland security approaches to a human security paradigm that prioritizes human and environmental needs.

We, as active members of global civil society, need to combine our voices and efforts with others in order to name, protest and change this injustice and win reductions of the world’s military budget through legal means and with high moral standards. Only in this way can we free up the financial and human resources essential to not only treating the symptoms of the global epidemic called “poverty”, but to address issues such as hunger, homelessness, migration, racial and gender inequality and environmental deterioration.

The Global Campaign on Military Spending (GCOMS) is an international campaign founded in December 2014 and promoted by the International Peace Bureau after the five Global Days of Action (GDAMS), which has been an annual occurrence since 2011. The main aim is to reduce the global military spending thanks to the cooperative works made by the organisations of civil society.

The GCOMS is run by a steering group of activists from all over world, and is coordinated by Centre Delàs of Peace Studies in Barcelona as a decentralized office of IPB. It works through its members to change government policy and practice on military spending."