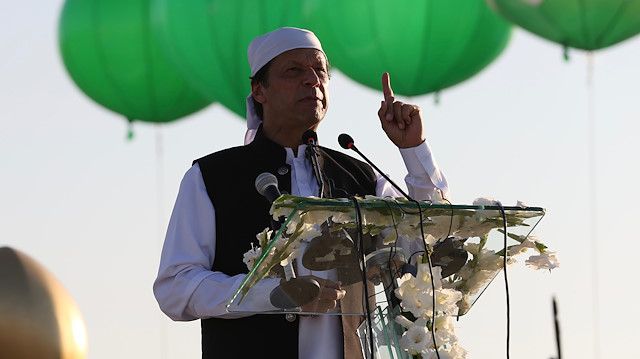 Human Rights Day has been observed every year on Dec. 10 since 1948, when nations in the UN General Assembly adopted the Universal Declaration of Human Rights.

"On Human Rights day we must appeal to the world's conscience, to upholders of international law to the UNSC UN Security Council to act against the illegal annexation of IOJK Indian-occupied Jammu and Kashmir by the Indian Occupation govt.," Khan said on twitter.

Condemning the Indian government's "siege" of Kashmir, he demanded "an end to the gross abuse atrocities being inflicted on Kashmiri men, women children by Indian Occupation forces in violation of all Int Humanitarian Human Rights Laws."

"We salute stand resolutely with the brave Kashmiris struggling for their right of self determination," Khan added.

Meanwhile, the day is being observed as a "black day" by several groups in the Indian and Pakistani sides of Kashmir, against New Delhi's controversial move.

Long-fraught ties between the two nuclear rivals have plummeted to a new low following the India move of scrapping the special status of Jammu and Kashmir, which is divided between the two neighbors in parts with both claiming it in full.

Many fear this step was an attempt to change the demography of the Muslim-majority state.

Some Kashmiri groups in Jammu and Kashmir have been fighting against Indian rule for independence, or for unification with neighboring Pakistan.

According to several human rights organizations, thousands of people have reportedly been killed in the conflict in the region since 1989.