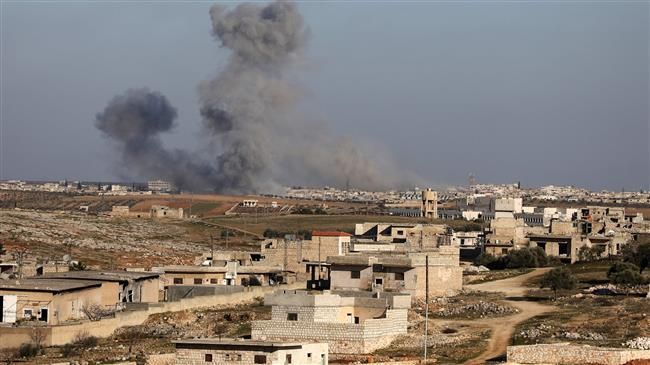 Syria's official SANA news agency reported on Saturday that army units had managed to wrest control over the villages and towns of Karsian, Ma’ar Shamarin, Abu Jreif and Takana near the city of Ma'arat al-Nu'man after eliminating terrorists.

Idlib remains the only large area in the hands of terrorists after the Syrian military managed to undo militant gains across the country and bring back almost all of Syrian soil under government control.

In another report, SANA said the terror outfits occupying Idlib and Aleppo countryside use locals as human shields and prevent them from leaving to safe areas through Abu al-Dohour, al-Habit and al-Hader corridors.

Jabhat al-Nusra and affiliated terrorist groups have established a number of monitoring posts in the areas adjacent to the recently liberated areas in a bid to block the civilians' exodus, the report added.

On Saturday, Syria's Foreign Ministry wrote to the UN, stressing that the operation in Idlib and Aleppo against Takfiri elements "will not stop until the elimination of those terrorists, who threaten safety and security of Syrian civilians."

In two letters sent to the UN chief and the head of the Security Council, the ministry complained that armed terrorist groups, particularly Hayat Tahrir al-Sham and Jabhat al-Nusra, continue to target civilians and facilities such as hospitals, schools and places of worship in Idlib and Aleppo.

The militants prevent locals from leaving the occupied towns to safe areas, according to the letters.

"The precise and well studied military operations carried out by the Syrian Arab Army and its allies in Aleppo and Idlib come after the appeals from the Syrian citizens in these two governorates, and in response to the systematic crimes committed by the armed terrorist groups which continue to exploit the unwavering military and logistic support provided by Western countries and their tools in the region," the letters read.