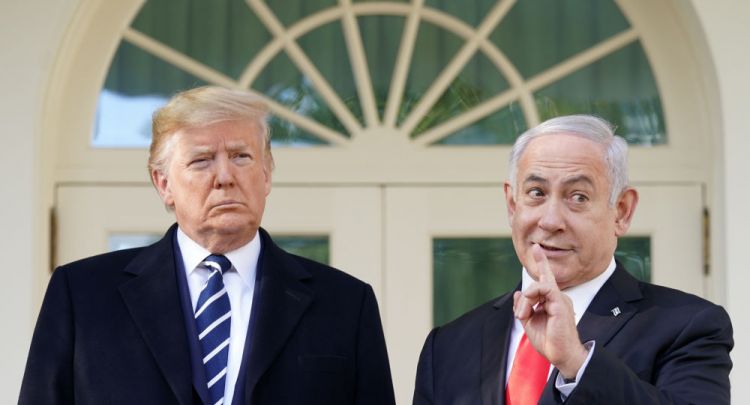 US President Donald Trump is set to unveil on Tuesday his long-awaited plan to reconcile Israel and the Palestinians, expected to enthuse the former, outrage the latter and break even further away from international consensus and traditional practices of American peace-making in the Middle East., Eurasia Diary reports citing Sputnik.

So-Called ‘Deal of the Century’

No specifics were publicly disclosed on Monday as Trump was discussing "the deal of the century" at two consecutive closed door meetings with Israeli Prime Minister Benjamin Netanyahu and opposition leader Benny Gantz, both facing off in national elections on 2 March for the third time in less than a year.

The initiative, in the works since the early days of Trump’s presidency, will address a set of issues, pivotal for Israel-Palestinian peace process, including permanent borders, the status of Jerusalem and Jewish settlements, future of Arab refugees, security arrangements.

Media speculate that Israel will be granted unprecedented concessions, tantamount to a green light to annex large and strategically significant portions of the West Bank.

Both Netanyahu and Gantz hailed Trump’s plan as a historic milestone and pledged to work on its implementation after winning the elections.

The Palestinian leaders, conspicuously absent in Washington, are expected to convene on an emergency meeting on Tuesday to formulate a response, according to their Chief Palestinian negotiator Saeb Erekat.

In a conversation with Sputnik he neither confirmed, nor denied media reports that Palestinian leader Mahmoud Abbas had refused to talk to Trump when the US president tried to reach him over the phone.

Palestinians have repeatedly rejected Trump's mediation efforts, accusing him of pro-Israel bias as he recognized Jerusalem as Israeli capital and relocated the American embassy to the contested city, cut off financial aid to the Palestinian administration, closed its embassy in Washington and announced that dozens of Jewish settlements, home to hundreds of thousands of Israelis in the West Bank and Jerusalem, were no longer deemed illegal.

Speaking on Monday, Trump expressed hope that Palestinians would eventually realize that his plan, propped up by promises of multibillion financial injections, was "overly good" to them and would come to support it.

The timing of the announcement, just five weeks shy of Israeli polls, also fueled speculations that Trump may be buoying Netanyahu’s bid for reelection as the public attention is bound to shift from the legal woes of the incumbent, who faces trial on corruption charges and requested for parliamentary immunity.