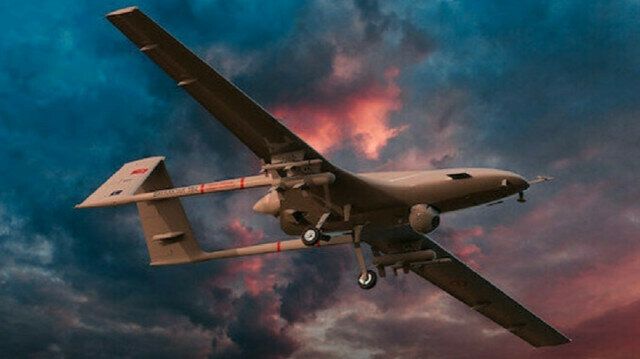 Turkish-made TB2 combat drones could be Ukraine’s only chance against Russia as tensions in the breakaway region of eastern Donbas continue to flare, according to a report by Forbes magazine.
In the report, titled “Ukraine Might Field A Drone Strike Force—And It Could Knock Out Russian Tanks,” author David Axe points that Ukrainian fighter jets are no match for Russia’s aerial defenses.
Citing aviation expert Tom Cooper, the report goes on to highlight that “the Ukrainian air force should convert to drones and loitering munitions,” noting that in the event of a major war, “Ukraine’s robots could swarm Russian army formations, overwhelming air-defense systems and knocking out tanks and other vehicles.”
The author also recalled that Bayraktar TB2 drones destroyed hundreds of Russian-made Armenian tanks and armored vehicles during the Karabakh conflict between Baku and Yerevan.
“High-flying, Turkish-made Bayraktar Tactical Block 2 drones firing tiny missiles destroyed hundreds of Armenian tanks, fighting vehicles, artillery pieces and air-defense systems.”
Cooper also claimed Moscow’s surface-to-air missile systems “can’t defeat swarms of drones and munitions,” as signs point that Ukraine is adopting tactics used by Azerbaijan against Armenia during the conflict in Nagorno-Karabakh.
“Ukraine could adopt Azerbaijan’s organization and tactics. Indeed, there are signs that transformation already is underway. The 1,400-pound, propeller-drive TB2—a kind of Turkish mini-Predator costing around $1 million—is the backbone of Azerbaijan’s drone strike force.”
Ukraine is said to be carrying out drills using Turkey’s nationally produced TB2 combat drones, which Kiev had purchased from Ankara in 2019, over the Black Sea and along the border of the flashpoint Donbas region.
“Ukrainian troops could deploy so many drones and loitering munitions that there simply would be more targets than Russian missiles. Even the Russians can’t just go on reloading forever,” the article concluded.
The conflict in the southeast of Ukraine has escalated in recent weeks, with Kiev and separatists blaming each other for violating a truce.
Ukraine has also accused Russia of sending troops to the border, while Moscow says its moves are in response to “Kiev’s provocative actions.”
Turkey sold a total of six Bayraktar TB2 drones and three ground controls stations to Ukraine in 2019, and the two allies signed a deal in December last year allowing Ukraine to make its own copies of the TB2.
Turkey’s combat drones had reportedly destroyed the Russian-made Pantsir missile systems in Syria, Libya and Nagorno-Karabakh, as Ankara’s deployment of UAVs was credited for the victories clenched by Turkey’s allies from Asia to Africa.
The Bayraktar TB2 armed UAV, which was developed and manufactured by Turkish defense company Baykar Technologies, has been used by the Turkish Armed Forces and the country’s Security Directorate since 2015.
The TB2 armed UAV was developed for tactical reconnaissance and surveillance missions; it can also carry ammo and conduct assaults with a laser-target designator.