daily news
Azerbaijan and Turkey will provide necessary assistance to each other in case of threat or aggression by a third country
Iran has produced 251 pounds of highly enriched uranium since January
Turkey provides any kind of support to Azerbaijan in process of reconstruction of Karabakh - Erdogan
'America is back,' says Biden ahead of meetings with EU presidents
Shusha Declaration reflects very clear expressions on the opening of the Zangazur corridor - President Aliyev
Shusha Declaration reflects issues of joint defense, mutual military help of Azerbaijan and Turkey - President
Shusha Declaration on Allied Relations raises Azerbaija​​​​​​​ni-Turkish relations to the highest peak - Ilham Aliyev
Turkish Consulate General to be opened in Shusha
﻿

I do not believe that the coalition government in Israel will be resistant and durable - Expert
Read: 194

Death toll from Israeli attacks on Gaza Strip rises to 35

2 women and 12 children among those killed 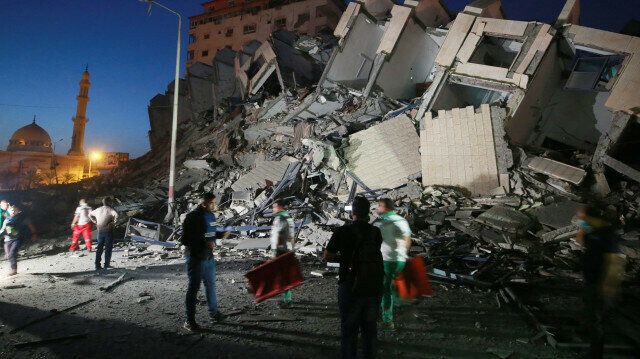 The death toll of Palestinians killed by Israeli forces since the start of their offensive on the Gaza Strip has risen to 35, according to the Palestinian Health Ministry.
The ministry said early Wednesday that two more Palestinians were martyred in the attacks, which began late Monday.
There were 12 children and two women among the martyrs, it added.
Earlier, the ministry said the number of injuries had climbed to 220.
Israeli warplanes also shelled a building near the headquarters of the Committee for the Reconstruction of Gaza. No one was killed or injured in the attack.
Meanwhile, the coast of northern Gaza was shelled by Israeli boats.
Tensions have been running high in the Sheikh Jarrah neighborhood of East Jerusalem since last week after an Israeli court ordered the evictions of Palestinian families.
Palestinians protesting in solidarity with residents of Sheikh Jarrah have been targeted by Israeli forces.
Five Israelis have also been killed and 45 others injured in Palestinian rocket attacks.
Israel occupied East Jerusalem during the 1967 Arab-Israeli war and annexed the entire city in 1980 in a move that has never been recognized by the international community.