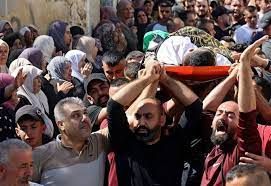 Five Palestinians were killed in clashes with Israeli troops on Sunday, marking the deadliest violence between Israel and Hamas since the two sides engaged in nearly two weeks of conflict in May.
The Israeli Defense Forces (IDF) said in a tweet on Sunday that it carried out efforts in Judea and Samaria earlier that morning “to stop Hamas terrorists from carrying out attacks against Israeli civilians.”
Two IDF soldiers were seriously injured during the operation.
Last night, based on accurate intelligence, IDF, ISA & “Yamam” forces operated in Judea & Samaria to stop Hamas terrorists from carrying out attacks against Israeli civilians.
During the operation, two IDF soldiers were seriously injured.
Israeli forces deployed a number of arrest raids against suspected Hamas militants in the occupied West Bank on Sunday, which led to two gun battles that killed five Palestinians, according to The Associated Press.
The Israeli military said it was keeping an eye on the Hamas militants for several weeks, and that the raids were ultimately set into motion because of what it said was immediate threats.
Five simultaneous raids were carried out and soldiers opened fire after being shot at in two different areas, the AP reported, citing the military. It said five militants were killed and several others were arrested.
According to Israeli Prime Minister Naftali Bennett, the militants were about to carry out the attacks “in real time,” the news wire reported. He said Israeli forces acted “as expected” and “engaged the enemy and we back them completely.”
The Palestinian Health Ministry revealed that two Palestinians were fatally shot near Jenin, a city in the northern West Bank, according to the AP. Three others were killed in Biddu, which is north of Jerusalem.
Hamas confirmed that four of the individuals who were killed in the clashes were part of the militant group, according to the AP. Palestinian officials said s 16-year-old boy was also killed, but it is not clear if he was part of Hamas.
A military spokesperson, however, said “as far as we are concerned, all those killed were armed Hamas operatives, taking part in fireflights,” according to Reuters. The official, however, said he was looking into information pertaining to the 16-year-old boy.
Hamas in a statement called on its followers in the West Bank to “escalate the resistance against the occupier at all points of contact.”
Bill Maher hits back at Whoopi Goldberg over 'Black national anthem'
More hospitals forced to ration care amid delta surge
“The choice of resistance is the one capable of protecting our rights, liberating the detainees, and protecting the holy sites,” the militant group added.
The latest violent clashes between Israel and Hamas come more than four months after the two sides agreed to a cease-fire, capping off 10 days of missile strikes and rocket fire in the Gaza Strip and in Israel.
Egypt negotiated the agreement.