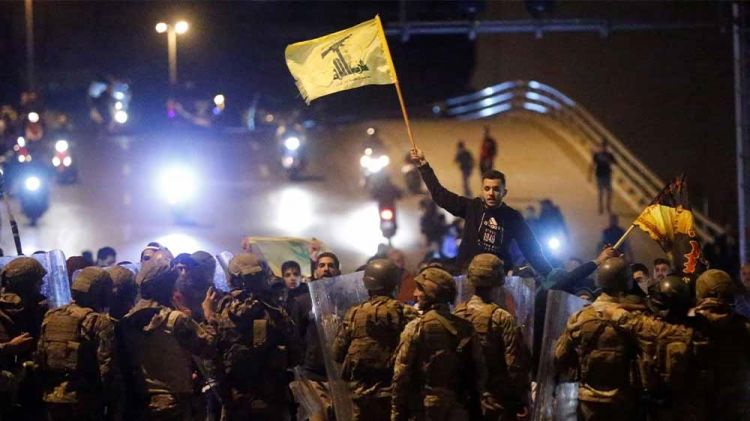 Following a shooting in Beirut at a protest against judicial probe into last year's explosion, Hezbollah and Amal Movement warned against a plot to drag Lebanon into a ‘malicious sedition’.

According to Mehr News, Hezbollah and Amal Movement warned against a new conspiracy to drag Lebanon into a ‘malicious sedition’, as the country witnessed a bloody day in Tayouneh area, where demonstrators protesting politicization of Beirut Port blast probe came under fire.

According to the latest reports by local Lebanese media, at least six people have been killed while 60 more were wounded in the shooting.

The demonstrators were demanding the removal of the judge investigating last year's explosion at the city's port, Reuters said.

In a joint statement, the two Lebanese allies Hezbollah and Amal said that peaceful protesters who were near Justice Palace in Tayouneh came under fire attack by snipers.

The snipers directed their weapons at the heads of protesters, Hezbollah and Amal Movement said.

“This attack aims to drag the country into an intentional sedition,” the statement said, lashing out at “instigators who are investing in the blood of Beirut Port blast’s victims in a bid to serve their spiteful political interests.”

Hezbollah and Amal Movement, in this context, called on Lebanese Army to shoulder its responsibility in securing the area.

The two allies also urged their supporters to calm down and “not to be drawn into malicious sedition.”

Reuters reported that at least two people were killed in the shooting.

Lebanese Hezbollah's al-Manar TV said "two martyrs" and a number of wounded had been taken to a hospital.

The Hezbollah leader Hassan Nasrallah said few days ago in a televised speech that the movement wants accountability and truth regarding the Beirut port explosion.

He said that the judge that is working on the Beirut explosion case is politically biased, saying that he will not reach the truth in the probe.

"The investigative judge into the Port Blast continues his predecessor’s mistakes and going far beyond," he said, adding "Why haven’t you heard the testimonies of President Aoun and ex-president Suleiman?"

Sky News quoted his correspondent as saying that B7 rockets had been fired in Beirut.

Simultaneously with the report, Lebanese Prime Minister Najib Mikati called on the people to calm down and show restraint.

Lebanese sources reported that the Lebanese Prime Minister has called for an extraordinary meeting of the Lebanese Central Security Council to review the situation.

Russia Today correspondent in Beirut also reported that four people were killed and 20 others were injured.

Al-Mayadeen also reported that the shootings continue and that a number of people were injured.

The Lebanese army said in a statement that protesters had been targeted as they marched on the Palace of Justice in Beirut.

The army deployed heavily in the area and said it would open fire against any armed person on the road.