Ukraine demands expulsion of Russia from Council of Europe - ednews.net

Ukraine demands expulsion of Russia from Council of Europe 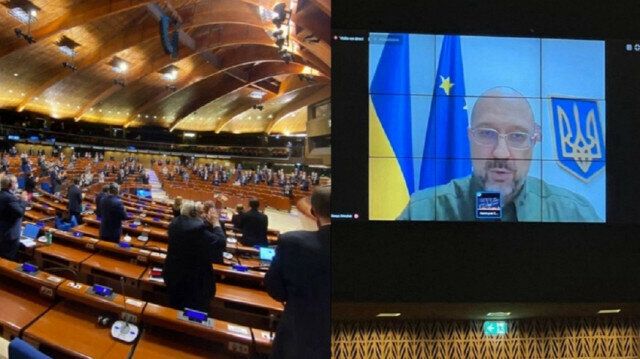 Ukrainian Prime Minister Denys Shmyhal on Monday demanded the Council of Europe to expel Russia and impose a no-fly zone to protect not just his country’s security but all of Europe’s.
Virtually addressing the extraordinary plenary session of the Parliamentary Assembly of the Council of Europe (PACE) to discuss the consequences of the Russian aggression against Ukraine, Shymhal called for a “tough response” against Russia for “starting a war in the center of Europe that can become a third world war.”
He said: “We demand a decision be approved to immediately oust Russia from the Council of Europe … We demand to close the skies over Ukraine for the sake of millions of people, for the sake of European and world security.”
Shymhal appealed to the parliamentary members to join the force with Ukraine to stop the aggression before “a nuclear disaster sets all of Europe on fire.”
He recalled that the Parliamentary Assembly’s decision to restore Russia’s voting rights in 2019, which had been temporarily suspended since 2014 after Moscow illegally annexed Crimea, “showed a poor understanding of the world on Putin’s regime.
“Europe chose to pacify the aggressor rather than defending democracy, rule of law. But in the last 18 days, the world has opened its eyes,” he proclaimed.
“The ones who support the unprovoked and unjustified aggression cannot stay in the single European family where human life is the highest value. Ukraine is on fire …” Shymhal said, defending Kyiv’s demands to suspend Russia’s membership from the Council of Europe.
He added that Russia has stopped its work with the Parliamentary Assembly as President Vladimir Putin wishes to avoid any punishment for his actions of the so-called “special military operation.”
“Punishment for terrorism and genocide cannot be avoided,” he asserted.
- Consequences against Russia’s aggression
The regional organization was established in 1949 in Strasbourg in the aftermath of the World War II to promote human rights, democracy and the rule of law. Article 8 of the Council's statute allows for the suspension of a member's rights of representation and also its membership if it seriously violates “the principles of the rule of law, human rights and fundamental freedoms.”
During the two days of the extraordinary plenary, the 47-members of the Council’s committee of ministers will examine whether Article 8 of the statute should be further applied to Russia which could lead to its exclusion from the Council of Europe. If the decision is adopted, it could lead to the complete exclusion of a member country for the first time in modern history, PACE President Tiny Kox pointed out.
“The Russian army has not just crossed the borders in an illegal and aggressive way but also the red lines set by this organization and that will not be without consequences,” Kox said.
Shymhal informed the Council that since the war began Ukraine has defended itself against the Russian aggression and killed more than 12,000 Russian soldiers, destroyed 389 tanks, 77 fighter jets, and 90 helicopters.