Azerbaijan's team of the Ministry of Emergency Situations ready to go to Turkiye
Read: 210

Why did the Minister of Defence of Ukraine change? - EXCLUSIVE
Read: 194

Ukraine’s defense minister to be replaced by head of military intelligence Budanov
Read: 174

The soldiers do not look for food and other essentials that would aid them on the battlefield, but instead appear to go rummaging through the homeowner’s personal belongings.
The video starts by showing five Russian troops opening the front gate of a home.
The men, wearing full military gear and armed with weapons, then walk into the home and can be seen stealing items from a white cupboard in one of the rooms in the home.
An additional soldier walks into the same room and picks up a pair of sunglasses, before putting them on his head and walking out of the room.
At the end of the video, soldiers can be seen leaving the home with bags full of stolen items and loading them into a trailer being pulled by a Russian vehicle.
One soldier smokes a cigarette as the other men load the equipment, and another soldier can be seen riding a motorized scooter, which may also have been taken from the property.
The video was shared on Twitter by “Special Kherson Cat,” a war-tracking account that frequently posts anti-Russian jokes, but which also shares video footage and news stories relating to the Russian invasion of Ukraine.
“Russian looting forces in action,” the account wrote on Friday, December 2.
The owner of the account, which has almost 200,000 followers, claims to be a cat owner from Kherson who was forced to flee their hometown.
The videos appear to have been recorded from pre-installed security cameras both inside and outside of the building. 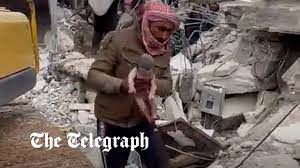 A baby born under Syria earthquake rubble is rescued - VIDEO