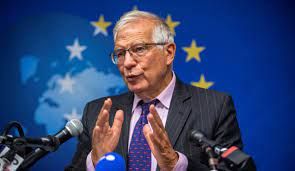 EU foreign policy chief Josep Borrell has condemned the shooting of a young Palestinian by an Israeli soldier in the occupied West Bank.
On Friday, Palestinian activists shared a video on social media of an Israeli soldier while scuffling with a young man in Huwara town, south of Nablus city.
As the young man, who was identified as Ammar Mefleh, tried to escape, the Israeli soldier shot him at point blank, leaving him badly injured. The Palestinian was later pronounced dead.
"The killing of a 22-year-old Palestinian on Friday by Israeli security forces was the latest example of the recent uptick in violence," Borrell said in a statement.
On Friday, the EU condemned Israel’s use of lethal force against Palestinians in the West Bank, citing that 10 Palestinians were killed by Israeli forces in just 72 hours.
The EU said that 2022 was the "deadliest year since 2006, with 140 Palestinians killed" by Israeli forces in the occupied West Bank and East Jerusalem.
Borrell called for an investigation into the incidents that took place in the West Bank.
"Those responsible must be held fully accountable," he added.
Tension has been running high across the West Bank in recent weeks amid repeated Israeli raids to detain what they say "wanted Palestinians" or to demolish Palestinian homes. The raids spark clashes with Palestinians, causing several fatalities.