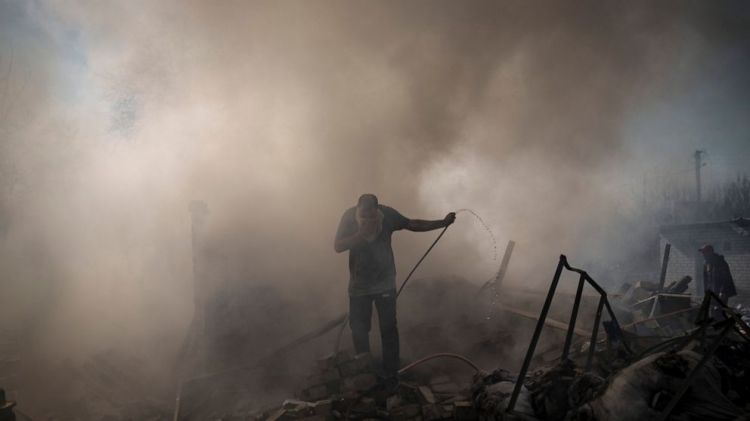 Russian forces have installed multiple rocket launchers at Ukraine's shut-down Zaporizhzhia nuclear power plant, Ukrainian officials claimed Thursday, raising fears Europe's largest atomic power station could be used as a base to fire on Ukrainian territory and heightening radiation dangers.
Ukraine's nuclear company Energoatom said in a statement that Russian forces occupying the plant have placed several Grad multiple rocket launchers near one of its six nuclear reactors. It said the offensive systems are located at new “protective structures” the Russians secretly built, "violating all conditions for nuclear and radiation safety.”
The claim could not be independently verified.
The Soviet-built multiple rocket launchers are capable of firing rockets at ranges of up to 40 kilometers (25 miles), and Energoatom said they could enable Russian forces to hit the opposite bank of the Dnieper River, where each side blames the other for almost daily shelling in the cities of Nikopol and Marhanets. The plant is in a southern Ukrainian region the Kremlin has illegally annexed.
The Zaporizhzhia station has been under Russian control since the war’s early days. Russia and Ukraine accuse each other of shelling the plant and risking a radiation release. Although the risk of a nuclear meltdown is greatly reduced because all six reactors have been shut down, experts have said a dangerous radiation release is still possible. The reactors were shut down because the fighting kept knocking out external power supplies needed to run the reactors' cooling systems and other safety systems.
The U.N.'s nuclear watchdog, the International Atomic Energy Agency, has stationed inspectors at the plant and has been trying to persuade both sides in the conflict to agree to a demilitarized zone around it. The agency did not immediately respond to a request for comment about the reported Grad installation. Ukraine has accused the Russians before of having heavy weapons at the plant. The Kremlin has said it needs to maintain control of the plant to defend it from alleged Ukrainian attacks.
With renewed focus on the dangers at Zaporizhzhia in the war, dragging on past nine months, the Kremlin is sending new signals about how to end it. It said Thursday it’s up to Ukraine’s president to end the military conflict, suggesting terms that Kyiv has repeatedly rejected, while Russian President Vladimir Putin vowed to press on with the fighting despite Western criticism.
Kremlin spokesman Dmitry Peskov said that "(Ukrainian President Volodymyr) Zelenskyy knows when it may end. It may end tomorrow if he wishes so.”
The Ukraine war has deteriorated relations between Russia and much of the rest of the world, but limited cooperation continues in some areas, such as exchanges of prisoners. On Thursday, in a dramatic swap that had been in the making for months, Russia freed American basketball star Brittney Griner while the United States released a jailed Russian arms dealer.
The Kremlin has long said that Ukraine must accept Russian conditions to end the fighting. It has demanded that Kyiv recognize Crimea — a Ukrainian peninsula that Moscow illegally annexed in 2014 — as part of Russia and also accept Moscow’s other land gains in Ukraine.
Zelenskyy and other Ukrainian officials have repeatedly rejected those conditions, saying the war will end when the occupied territories are retaken or Russian forces leave them.
In an acknowledgement that it’s taking longer than he expected to achieve his goals in the conflict, Putin said Wednesday that the fighting in Ukraine “could be a lengthy process” while describing Moscow's land gains as “a significant result for Russia."
During a conference call with reporters, Peskov said Moscow wasn’t aiming to grab new land but will try to regain control of areas in Ukraine from which it withdrew just weeks after incorporating them into Russia in hastily called referendums — which Ukraine and the West reject as illegal shams. After earlier retreats from the Kyiv and Kharkiv areas, Russian troops last month left the city of Kherson and parts of the Kherson region, one of the four illegally annexed Ukrainian regions.
Putin vowed Thursday to achieve the declared goals in Ukraine regardless of the Western reaction.
“All we have to do is make a move and there is a lot of noise, chatter and outcry all across the universe. It will not stop us fulfilling combat tasks,” Putin said.
More than ten cities and villages in the region were shelled, including the town of Bakhmut, which has remained in Ukrainian hands despite Moscow’s goal of capturing the entire annexed Donbas region bordering Russia.