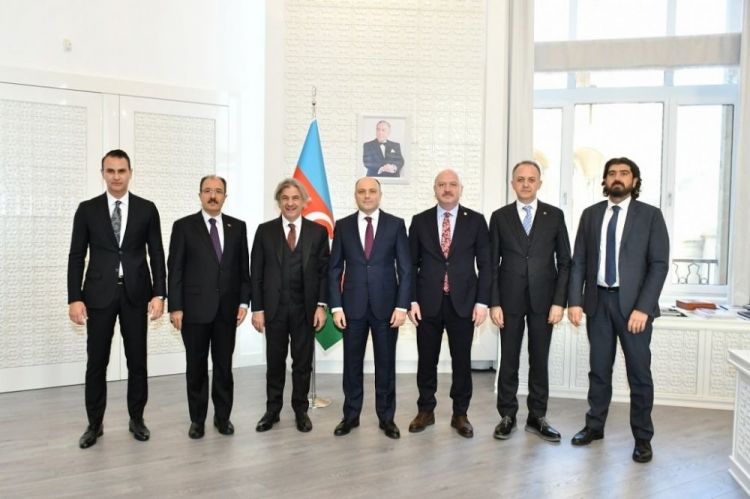 Azerbaijan and Turkiye have discussed major opportunities for boosting cultural ties, Azerews reports.
The two countries expressed their readiness to cooperate in this direction to the fullest extent.
In his remarks, Azerbaijan Culture Minister Anar Karimov noted that experts from Turkiye are also involved in the archaeological excavations conducted in the territories liberated from the Armenian occupation.
Although human resources in this field are sufficient in the country, there is a lack of relevant laboratories. Currently, ten laboratories in this field are operating in Turkiye. Their experience can be used to determine the results of the research conducted in Azerbaijan.
The minister also stressed that there is a need for Turkiye's experience in the field of restoration and reconstruction of historical and cultural monuments vandalized by Armenia and it would be useful for people working in this field to participate in training organized by Turkiye.
Anar Karimov expressed his satisfaction with the conduct of the second meeting of the Azerbaijani-Turkiye Joint Cultural Commission in Baku.
Turkiye's Deputy Minister of Culture and Tourism Ahmet Misbah Demircan stressed that Turkiye attaches great importance to the Azerbaijani-Turkish Joint Cultural Commission in the context of cultural cooperation.
The Turkish deputy minister voiced the proposal to hold the meetings of the commission twice a year. He stressed that the intensive exchange of ideas on specific areas can better contribute to the dynamic development of cooperation.
At the meeting, Anar Karimov recalled that Turkish Cinema Week was held in Baku this December. The film festival aroused great public interest. He pointed out that such projects and festivals will contribute to the further deepening of cultural ties.
Speaking about the Korkut Ata Turkic Word Film Festival to be held in Shusha next year, Anar Karimov stressed that he was pleased that young people showed more interest in the festival. He called the festival a remarkable project in terms of the promotion of Turkish world cinema.
Ahmet Misbah Demircan also highly valued the film festival and took the initiative to establish Korkut Ata Cinema Agency to demonstrate movies on a single platform in Turkic-speaking states.
The Turkish deputy minister also brought up the issue of opening a film school covering the countries and peoples of the Turkic world.
He emphasized the importance of Azerbaijan and Turkiye acting as the main initiators of this project.
The sides also touched upon partnerships in the field of the museum, and the creative industries and exchanged views on the development of cultural tourism.