What does withdrawal of US troops from Iraq mean? - American military expert explains
Read: 721

The loss of the four young men is extremely sad and we share grief of their families – British journalist
Read: 563

Open Skies Treaty to collapse if US talks allies into quitting it
Read: 406

President Moon marks the 74th anniversary of Korean liberation from Japan with the offer of 'fair trade' with Tokyo. 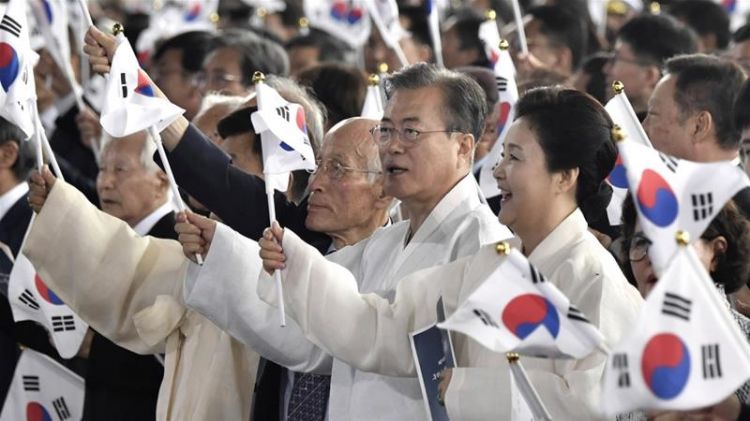 South Korean President Moon Jae-in has struck a conciliatory tone towards Japan, offering to "join hands" if Tokyo chooses dialogue as relations between the two countries dip to fresh lows following a recent trade dispute.
Moon sought to dial down the temperature on Thursday in a speech marking the 74th anniversary of Korea's liberation from Japan's rule from 1910 to 1945.
"If Japan chooses the path of dialogue and cooperation, we will gladly join hands," Moon said, adding that Seoul is willing to work with Tokyo to secure "fair trade and cooperation" in the region.
Seoul and Tokyo - both of them democracies and market economies - are mired in long-running disputes over Japan's use of forced labour in the first half of the 20th century.
Relations further soured after the neighbouring countries engaged in a tit-for-tat trade war, which saw them remove each other from their lists of trusted trading partners this month, raising concerns over global supply chains.
That came after Tokyo imposed restrictions on exports crucial to tech giants such as Samsung last month, following a series of South Korean court rulings ordering Japanese firms to pay for wartime labour.
Dressed in a light blue traditional Korean attire, Moon - who earlier this month said South Korea will "never be defeated again by Japan" - insisted that Seoul has "not dwelt on the past".
"Reflecting on the past does not mean clinging to the past but overcoming what happened and moving toward the future," said Moon.
"We hope that Japan will play a leading role together in facilitating peace and prosperity in East Asia while it contemplates a past that brought misfortune to its neighbouring countries."
Tokyo maintains that all issues of wartime compensation were settled under the 1965 treaty that re-established diplomatic ties which included a package of about $800m in grants and cheap loans for the former colony.
'Unification by 2045'
The dispute has raised concerns over the potential implications on the security cooperation between the two US allies in the face of a series of North Korean missile tests in recent weeks.
Pyongyang and Washington are engaged in a long-running diplomatic process over the North's nuclear and missile programmes that has seen three unprecedented encounters between their leaders in the space of a year although little progress has been made on denuclearisation.
Moon sought to play down North Korea's recent tests - following the example of US President Donald Trump - as he assured Seoul had "even stronger" defence capabilities and was working to prevent escalation of tensions.
But, he added: "The ultimate goal that these actions serve is dialogue, not confrontation."
The dovish South Korean president has long favoured dialogue with Pyongyang, dangling cross-border business projects as incentives.
Moon said economic cooperation with North Korea will provide a one-stop solution to the "problems we currently face, such as low growth, low birthrate and an ageing society".
But proposed projects are currently blocked because of international sanctions imposed on the North over its nuclear and ballistic missile programmes.
Moon pledged on Thursday that he will "solidify the foundation" with the goal of "achieving peace and unification by 2045", although his single five-year term presidency ends in 2022.
Pyongyang has recently given Seoul the cold shoulder, saying nuclear talks will be "strictly" between the North and the United States and refusing to hold a separate dialogue with the South.
AlJAZEERA