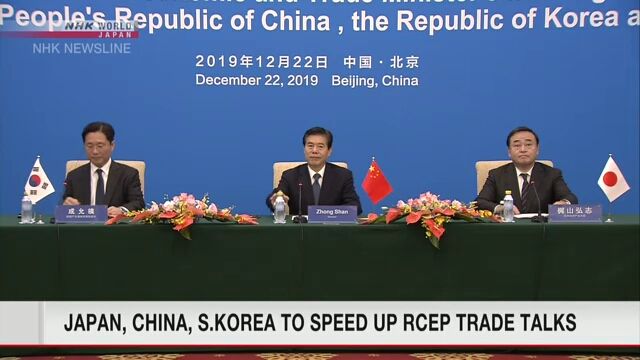 Trade ministers from Japan, China, and South Korea have agreed to speed up free trade negotiations, including those for the Regional Comprehensive Economic Partnership, or RCEP, Eurasia Diary reports citing NHK News.

Their meeting in Beijing on Sunday was the first of its kind in about three years.

Zhong Shan of China, Hiroshi Kajiyama of Japan and Sung Yun-mo of South Korea issued a joint statement and held a news conference after the meeting.

The statement notes that cooperation among the three countries is important at a time when the global economy is facing tensions over trade and other issues.

The ministers say they will cooperate to conclude the negotiations and sign the RCEP trade pact that includes 16 Asia-Pacific nations by the end of next year.

They also agreed to accelerate negotiations on a planned trilateral free trade agreement.

Kajiyama told reporters it is important for the 16 RCEP parties to work together to resolve the key issues concerning India, which recently proposed withdrawing from the talks. He added that the three countries will intensify their efforts.

The Japanese and South Korean ministers did not hold bilateral talks on trade controls. Bureau chief-level negotiations on the topic took place earlier this month.