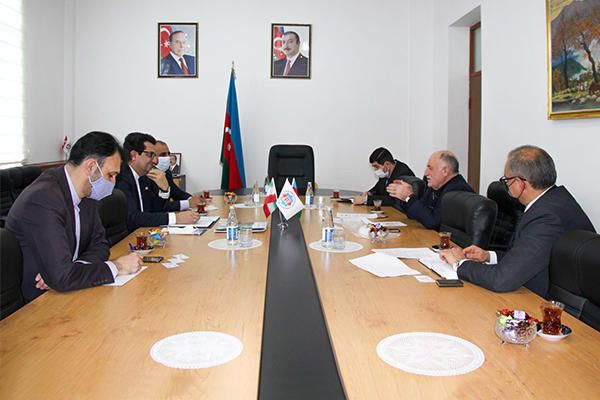 He made this remark during the meeting with the President of the National Confederation of Organizations of Entrepreneurs of Azerbaijan Mammad Musayev.

The meeting was aimed at further expanding economic ties between the two countries, during which the ways to expand cooperation between entrepreneurs were discussed.

The Iranian ambassador noted that before the visit to Azerbaijan, he visited four Iranian regions bordering with Azerbaijan, met with entrepreneurs, heads of chambers of commerce and industry, and with the management of the Iran Chamber of Commerce, Industries, Mines and Agriculture.

He stressed that Iranian entrepreneurs have expressed interest in establishing ties with Azerbaijan.

Touching upon the Joint Intergovernmental Commission, which will be held in Tehran on January 18-19 this year, Mousavi underlined that it will contribute to the development of economic ties.

Moreover, the ambassador emphasized that the Tabriz Chamber of Commerce, Industries, Mines and Agriculture is interested in holding a joint videoconference with the Confederation.

“There are ample opportunities to establish relations with companies operating in the regions bordering Azerbaijan, at the same time, specialized exhibitions are being prepared,” the ambassador added.

Likewise, he suggested establishing joint ventures for the transportation of Iranian products both onshore and offshore.

In turn, Musayev noting that the entire 2020 was a difficult year for the world economy, underlined that Azerbaijan has maintained economic stability and ended the 30-year occupation of its territories.

“The high political ties established by President Ilham Aliyev with neighbouring countries play an important role in the development of economic relations,” he added.

Stressing the fruitful cooperation between business support organizations of Iran and the Confederation, Musayev stressed that most of Azerbaijan’s liberated territories fall on the state border with Iran, which creates great opportunities for investment in these territories.

Furthermore, Musayev stressed the importance of opening a Trading House in order to increase trade turnover between the two countries.

Additionally, he briefed the participants on the International Congress of Industrialists and Entrepreneurs, where he was deputy chairman.